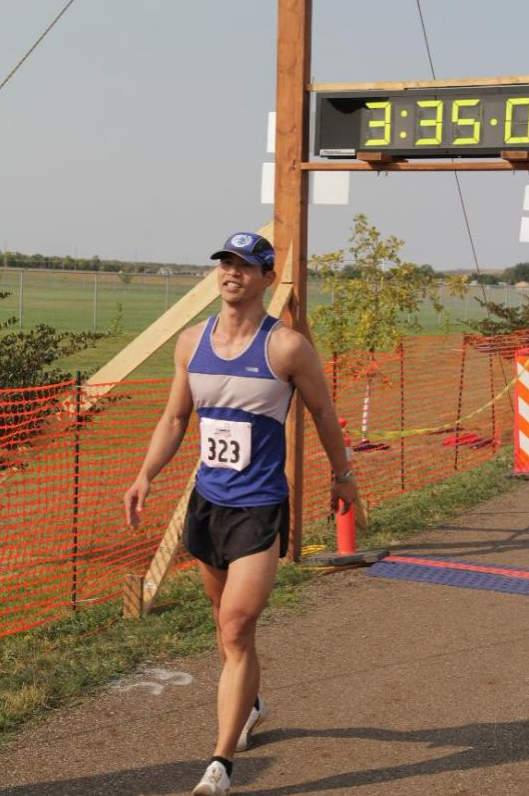 It was pretty obvious going into this marathon my endurance wasn’t going to be there. I hadn’t run a marathon in a year-and-a-half. The highest weekly mileage logged all year was about 30 miles. And you know what, that was fine: the 2012 plan all along was to be low-mileage year and there was zero self-imposed pressure to, say, go for a win or set a personal record. Just do the best I could with the fitness I had.

So for me, this would be a contest of guts. And strategy. Good pacing was tantamount, although having to dig deep at the end seemed inevitable. And not think about how I had another marathon to run the next day. One race at a time.

There was plenty of parking at Cottonwood Park, and even 15 minutes before the start, there was no waiting to use a port-a-potty. This race was also somewhat unusual in that the marathon course was two identical laps of 13.1 miles, and the half-marathoners lined up behind the start line together with the marathoners and relay runners. You could tell who was whom by their bib colors. Most of the folks lining ahead of the 3:30 post I stood next to seemed to be half-marathoners.

We took off. My Garmin Forerunner 110 had bricked two weeks before, and although Garmin was replacing it under warranty for free, it arrived in my mailbox a couple days too late for this race. So I was wearing an analog Citizen watch my dad had gifted me, not knowing my exact time splits. It actually felt somewhat liberating not having that sort of feedback and running strictly by feel.

Many people took off like greyhounds in the first couple miles but, predictably, they all had come back to me after two miles. There was an exception: a blond college-aged relay runner whom ran side-by-side me for the first 10k. We kept each other going all the way to her relay handoff point—including a steep hill that was nearly a mile long at Mile 5—sometimes bumping elbows with each other. “Sorry, sorry,” we’d say simultaneously.

After she was done with her leg, I ran alone the rest of the race. Flying down the hill I earlier ascended, then coming into the finish area for the first loop, the elapsed time was just a few ticks over 1hr35min and the race announcer announced my name and hometown over the public address system. He also noted, “Remember, some of these folks still have another lap to go even if they’d like to be done!” I smiled and felt a little bit like a rock star. My body was still feeling relatively fresh and after I passed through the area, there was no one in sight in front of me. (In fact, my race position was 11th place at this point.)

On the second loop, my legs were still feeling pretty spry until I got to that steep hill again. Yikes! I managed to pass a couple runners here but two guys also caught and dropped me. I was probably going about two minutes per mile slower on this hill than during the first lap, but I wasn’t too alarmed particularly because I knew it would be mostly downhill after that.

At Mile 21 my legs started to experience their first cramps. Actually, with literally every footstep I’d feel major tightness in my calves, but not to the point where they would lock up and seize. But I kept pushing through them, hoping my legs would last enough for five more miles. Despite my lack of training, I felt fairly confident they’d last, and at one point (around Mile 23), I was starting to think finishing in under 3:30 was in the bag.

In fact, debilitating seizing began at Mile 24. I even had to walk for about 10 seconds, and I knew my speed had just nosedived like a kamikaze pilot. No Garmin was necessary to determine I was probably going about 12 minute/mile pace. Maybe 13.

The worst occurred at the Mile 25 marker, which was slightly embarrassing. Many people were here cheering, and my hamstring completely cramped up to the point where I had to stop right in front of them. I grimaced in pain while I tried to stretch out the leg. Meanwhile the first-place woman caught and passed me here as I desperately tried to return to a trot.

She put distance on me pretty quickly, but then had to resort to a walk. I was able to jog, but despite her walking, I was not able to catch her. Avoiding getting chicked today was not motivation enough to turn on the afterburners; my wheels had already fallen off and the axle had broke. I was just trying to get to the end without having to walk or stop again.

With the finish line in sight, I was even able to pick up the pace a little—not full on sprint, but enough to feel respectable. “Here’s Felix Wong from Fort Collins, Colorado,” said the announcer. “Even finished under 3:35.”

Turned out this was somehow good enough for a top 20 finish overall. That was nice. Even though it’s hard to be proud of running 12- or 13-minute miles at the end, this was probably the worst my legs have ever cramped up in a marathon, and I fought through it without panicking, getting irritated or feeling sorry for myself.

Not sure if I ran this race the smartest I could—fading so badly at the end is usually indicative of running too fast in the beginning—but I definitely felt like I showed some guts. And I remained undaunted that there was another marathon to run the next day—this one in Billings, Montana—even though my legs were now completely shot.