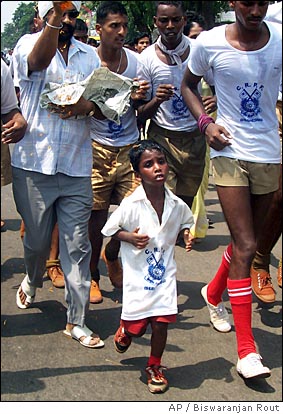 please lord let this boy be saved! god bless, my heart and thoughts are with you budhia. ↩ Reply

In my opinion, the disgrace is on whoever interfered with the judo man's relationship with the child. Under proper supervision, that child was thriving!!! And to all those who consider the man and his wife to be a disgrace, I look at the population of suffering children in India and worldwide and no one lifts a finger to help, but when a kind and generous man puts the rest of us to shame by adopting not one but many children, that's when you see and hear all the jealous and envious people rise up to complain. Shame on you all, you should be aplauding the man and his family. If the judo man had any evil intentions concerning the child, how come no other child in his care was pushed to any supernatural feats? ↩ Reply