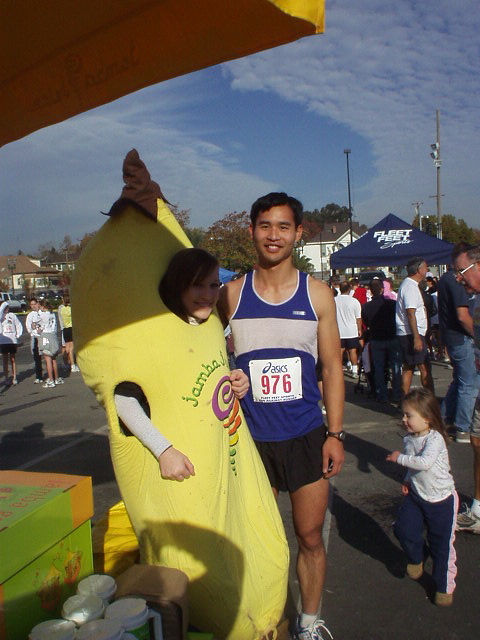 Gobble gobble! Today is Thanksgiving, or the day to show how thankful we are for our blessings by gorging our stomachs with lots of turkey and pumpkin pie. Unfortunately, this sometimes results in strained body weight scales, fat tire jokes or simply being called “Gordo”. So how to prevent that? By going for a run of course!

Or so the thinking went for the 800 or so people who turned out at the inaugural Run for Hunger 5k at Stockton’s new downtown ballpark. This run, if you could not tell by the name, was a benefit run to help provide for the hungry. Here is the full report:

I was in Stockton, CA visiting friends and family for the week. My awakened MG (after hibernating for 4 months) roared into downtown where there was plenty of parking across from the ballpark. Though sunny and fairly warm, lots of people were out in long pants and jackets. I, too, had my warmups on, and to further facilitate the “warming of the muscles” process, several others and I darted up and down the parking lot 15 minutes before the 8:30 a.m. scheduled start like wild turkeys. This was Thanksgiving after all!

Problem was, there were so many other turkeys still in line for day-of-registration that when the clock struck half past eight, nothing happened. “They say the race won’t start until 9:00,” reported one of the runners warming up.

Finally, at around 8:50, runners started congregating at the front parking lot entrance of the ballpark, which was the official start of the race. In all there were 726—perhaps the largest running crowd Stockton has ever seen. (In contrast, last May’s Great Spear-It 5k at Stockton’s Asparagus Festival—which covered roughly the same course—yielded just over 400 runners). I took my customary position—that being in the 2nd or 3rd row—all while listening to various conversations going around me.

“Let the youngsters go out in front,” said a middle-aged man to a woman, perhaps his wife, sister, or friend.

Meanwhile some of the youngsters—some of them already bent over like Wile E. Coyote in a “ready-set-go” position and thumbs hovering above the “start” button of their watches even though the race would not commence for another five minutes—were having a casual discussion. “How fast are you going to go out?” asked one.

Okay!, I thought. I won’t be keeping up with HIM! And then I reviewed my own pre-race strategy. How the race played out for me went almost exactly as planned:

After the Stockton Police sirens signaling the start of the race commenced their blaring (much better than using guns, which might have rallied Stockton’s notorious gangmembers into action), twenty-five to thirty people were already ahead of me. “Great,” I thought. “Just wait nine minutes, and I’ll pick them off one by one…”

Meanwhile I kept pace behind the three female frontrunners, two of whom I thought I recognized from earlier races. I stayed about ten feet behind, their pace being great, the jouncing of their ponytails hypnotic, the view being… well, nice… 😉

Anyhow, the three chicks and I rounded the turn-around point within five seconds of each other, with myself right behind and 00:09:26 elapsed since the start. This was my cue to go! Intent on surging a lot more gradually than back at the Great Spear-It 5k last May—when I had taken off like a rabid dog chasing a postman—I quickened my pace just a little bit, just enough to pass the trio (and a couple of guys) in about twenty seconds.

A minute after that I heard one of the runners still heading the other direction towards the turnaround yell out “first woman” to one of the girls now behind me. And then it hit me—we were in the second half of the race, and I was ahead of 100% of the 300+ women running here!

At 00:12:xx I also caught up to an older gent, perhaps in his mid-40s. For two minutes we ran side-by-side until we neared a left turn on Center Street. Then, per pre-race-strategy, at 00:14:xx, I transitioned into a quicker four-count breathing pattern (inhaling and exhaling every two steps instead of my usual three) and slowly pulled away.

A minute after that I made a mental note to myself. “Still not too comfortable breathing the four-count,” I thought as my lungs were starting to burn. “Gotta practice that more in training…”

Nevertheless I did not to relent. I picked off one more runner before the 2nd-to-the-last turn on Lincoln Street. How many more runners were ahead of me?, I wondered. I did not know but was now within shouting distance of a teenager sporting a T-shirt reading “Tokay High School”. Great, that was the high school in Lodi I walked to each day in 8th grade from my middle school for an Algebra II class. Back then I would have been lucky to run one mile, and no more, in eight minutes. How could this guy be so young, and yet so fast?

I started to close in on him, but perhaps hearing my footsteps only motivated the kid more as he then began to pick up the pace. Self-defeating thoughts began to enter my mind. “The kid was ahead of you the entire race,” I thought to myself. “He deserves to beat you.” Yes, what a wuss I was for thinking such. Schooled by the school kid. Never mind that my lungs were totally maxed!

So I never mounted a serious challenge as the kid began to put some distance between us. And where was the finish line? It seemed to be beyond where I had expected it—I had mistakingly thought it would be at the exact same place as the starting line—but by how much?

“One hundred yards to go!” yelled out a volunteer. Ok, time to go. I began my sprint, if only to trim two or three seconds off from my total time. The kid was already done.

As I strode across the finish line, another volunteer shouted out my time: 00:19:04 (or 6:09/mile pace). Woah! My first thought was that if only I had a tad more desire and dug a little bit deeper, a little bit sooner, I might have broken nineteen minutes for the first time in my life.

But I did not feel even an iota of disappointment. This was—at least for 5k, and up to this point—the race of my life! And the results reflected this: 3rd in my age group (30-39) and 19th overall out of 726 people. No women beat me for the first time, ever. And I set another run PR (personal record) for the 5th time this year. I truly enjoyed this run.

Incidentally, over half of the people who beat me were 14-17 years old. Amazing. Those teenagers—and everyone else, regardless of how fast or slow—certainly earned extra helpings of turkey and pumpkin pie for later that night. Just don’t call us Gordo.

Great coverage and much appreciated. I am the race director for the event (my first time as director and the first Thanksgiving run for the foodbank).

I hope you continue to come to this now-annual event and help get the word out so that it will become the annual Thanksgiving tradition that we believe it will be. We have made improvements to every process and have added a 10K for this year.

Thanks again, glad you enjoyed the run.