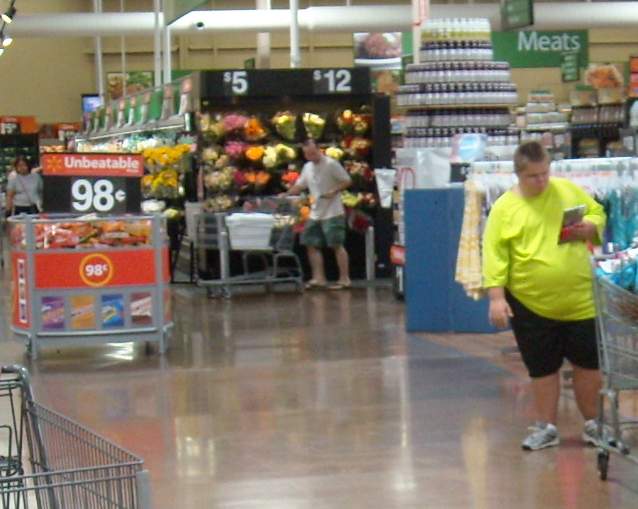 Seems like the world’s largest corporate behemoth, Wal-Mart, has been in the news quite a bit recently especially after the unveiling of Robert Greenwald’s documentary, Wal-Mart: The High Cost of Low Price. This movie is showing for free in numerous cities across the U.S. (see Wal-Martmovie.org for a showing near you) and I got to see it at the Front Range Community College in Fort Collins this afternoon. While it lacked the comical punch that typifies, say, Michael Moore’s documentaries, it was nevertheless eye opening and thought provoking.

To summarize, the documentary contrasts Wal-Mart’s good-sounding rhetoric with questionable practices and apparent indifference to the well-being of its employees, customers, and community (as quantified by measures other than inexpensive products), all while presenting a litany of complaints. The movie took pains to show that many of these complaints were made by god-fearing, Bush-backing, conservative employees or competitors:

While the criticism above is hardly exclusive to Wal-Mart, its corporate behavior is particularly egregious considering it has the resources to make a profoundly positive impact on society (it could begin by, say, ensuring that all of its employees have health insurance). It has the opportunity to be the model corporate citizen standard bearer but instead, it seems, it is diminishing quality-of-life standards by dragging down wages, not providing adequate medical benefits, draining taxpayers’ wallets, and promoting sweatshops around the world.

In light of the above, one should think about whether or not he wants to patronize the corporation. Surely, Wal-Mart benefits the consumer in some ways, which is why so many people shop there. In addition to providing low prices, they offer the convenience of having a wide range of products, everything from food to clothing to electronics and hardware, all in one store. Many are open 24 hours. Hmmmm, what else? I’m not sure, but the question is, are all of these things worth having many of the smaller mom-and-pop stores driven out of town, in addition to the increased urban blight and traffic (points the movie do not even begin to address) that Wal-Marts—and/or the people who shop there—often cause?

Personally, I think it is worth patronizing other stores that add to the character of the community, offer personalized service, and provide livable wages to its employees even if it means the consumer has to pay just a tad more. Then again, I already have been boycotting Wal-Mart for the last 8 or so years, but for slightly different reasons, including 1) inept service that usually left me tearing my hair out, 2) interior decor and exterior aesthetics that are as inspiring as a jail cell, and 3) really shoddy products. The email below, which I wrote to a friend after begrudgingly going to a Wal-Mart with my dad in July 2005 (the first time going there in many years), underscores some of these points:

So last night at 10:00 p.m. my dad and I went to the new Super Wal-Mart, or whatever it is called. Man, even this late at night, it was packed. Now I know what everyone does in Stockton, California, at night—they go to Wal-Mart!

I was actually a little apprehensive to go in, being faced with this gigantic super center selling everything from diapers to Cocoa Puffs and boom boxes thrown in for good measure. There was even a McDonalds, a “Go-ji Nails Center”, and optometrist in the store, so presumably one can get her nails done and glasses fitted at the same time all while slurping on a super-sized milkshake.

Upon walking in the store we passed by several stacks of “price reduced” items, and I couldn’t help but bust out laughing when we passed a tower of 8.5 X 11″ spiral notebooks going for 10 cents each. Just 10 cents, now that is simply ridiculous! Although I probably shouldn’t have started laughing, because then my dad proceeded to buy up a whole stack of them.

Then we went looking for a cassette adapter for my dad (long retarded story I won’t get into), and my dad, being Mr. Efficient, proceeded to ask every one of the 30,000 Wal-Mart employees standing around, keeping the floor warm or keeping an eye out for terrorists, I dunno. Eventually, we went over to the electronics department, and asked a rather large lady where we could find this item.

Finally, I scanned the aisle behind the first woman (who deferred the question), and it was *right behind her*. If she had just turned around, she would have seen it, but I guess she decided there were no terrorists in that direction, so she remained glued to her square tile on the floor.

Now I know why Wal-Mart employees are paid minimum wage. But then again, even with minimum wage, one would be able to buy 67 spiral notebooks!

Of course, to be fair (and as CEO Lee Scott would merrily point out), Wal-Mart associates are actually paid MORE than minimum wage. Some of them, in fact, are paid almost $10/hour and, depending upon which source you believe, Wal-Mart’s average full-time employee income is somewhere between $14,000–$17,500/year. Whooppee!