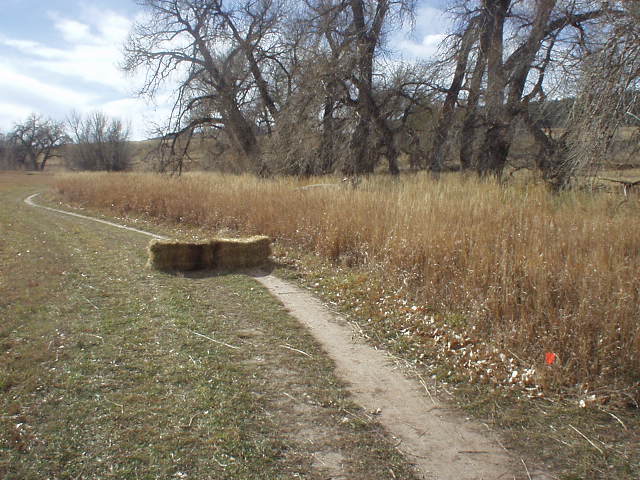 All right! I am starting to feel really good while running now, though you would not know it from the results. Or the sheer number of fellow Coloradoans passing me during a race, again!

The Rattlesnake Rumble was at Cottonwood Glen Park and benefited the Fort Collins Youth Cross Country Program. It is now the first cross-country race I have ever entered. What did it entail? 7.3 kilmeters (or 4.5 miles) of running, 16 hay bales and 8 or so logs to hurdle over, plus the occasional irregularly shaped mounds of dirt to ascend and descend. There were also sections of 10-inch-wide singletrack channeling through green and golden grass, along with occasional dirt and gravel roads which were actually the fastest segments of the race. Interesting course for sure.

I may have started out too fast as within the first 10 minutes about 2 dozen people were blazing by me, but I never slowed down and no one passed me in the last 20 minutes of the race. (Never mind that during the entire race, I did not pass even one single person!) Actually, I felt smooth and relaxed, maintaining a cadence over 180 steps per minute the entire way. It was a 2-1/4 loop course, and during that last segment, I even managed to pick up the pace a smudge while transitioning into a 4-count in/out breathing pattern (i.e., 2 steps per exhale) from my usual 6-count. I sprinted in the last 100 yards, recalling my interval workouts for the previous weeks.

Now if I can only increase my cruising speed. My final time was 34:21, or a 7:34/mile average, or 29th out of 67 people. While I am okay with my average pace considering the obstacle-laden course, man, that’s only 57th percentile! Then again, there seemed to be only 1 or 2 stragglers in the field, and virtually everyone at this small meet was a serious runner. The overall winner finished in 27:25, or a 6:02/mile average. How did he do it? I don’t think his leg turnover could have been much faster than mine, if any? Does he just have a lot more spring in his steps? Hmmm…

Oh, one more note. There were no rattlesnakes in this race. The weather this morning was probably too brisk for those cold-blooded reptiles!