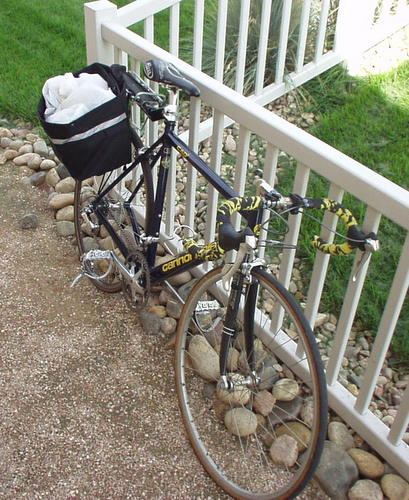 So for the last decade or so, my commuter bike was The Tank, a Raleigh M300 mountain bike that I picked up for $260 brand new in 1996 and threw on perhaps $30 worth of accessories including PowerGrips, bar-ends, and a rear rack. The first year it took me all around the bay and back for work and class, and in later years, took me to and from my job in Fremont on select days. While that machine was virtually indestructible—as evidenced by its one flat tire as its only problem during the last decade—and on its 10th birthday (with no componentry upgrades) even successfully completed a rolling 100-kilometer bike ride, I had always found myself frequently wishing for something that had speed better approximating the Road Runner than Wile E. Coyote.

When I moved to Fort Collins and left The Tank behind in California (now my own set of wheels in that state), I figured I had the chance to build The Ultimate Commuter 2.0. Enter Carrie, my ’98 Cannondale CAAD3.

I wrote a little bit about her components and specifications a few months ago. Now, at first glance you might think that her mechanistic jewelry—including a Spinergy Rev-X carbon rear wheel and Dura Ace 9-speed components—would be more fitting for Mario Cipollini than Max the Bike Messenger. And right you would be. So I sold the carbon wheel on eBay for >$200, replaced it with a $30 wheel I picked up from the Fort Collins Craigslist, and voila! A bicycle that now cost $100 less than the Tank did 10 years ago!

Some more componentry swapping was in order. For one thing, many (well, almost all) of her components were better than Canny‘s. Clearly, that was quite unacceptable considering Canny (with our history and her overall condition) remains my race steed. So I swapped out Carrie’s Shimano Ultegra brakes with Canny’s 1992 RX-100s. The Ultegra brakes were about 25 grams lighter on average. Okay, so that is only a savings of 50 grams, but it’s the principle that matters here. Now the only stock components that Canny retains from 1993 are her frame, fork, handlebars, seatpost, and cable housings.

Then I put on the Delta rear seat post-mounted rack that worked brilliantly during the 2003 Paris-Brest-Paris race and 2005 Butterfield Double Century. I threw on some $6 Delta “side rails” (on clearance from Nashbar) to use in conjunction with a $10 Nashbar grocery side bag. You can see the setup at the top of this page.

Next I cleaned the chain and gave it the melted hot-wax treatment. No more worries about getting grease on my leg, pants, or hands from the chain.

Additional modifications I am pondering for the future are puncture resistant tires (either non-pneumatic tires or something like Continental Gatorskins), but only when her current worn tires completely wear out.

So how well does this setup work? The first test was a couple of weeks ago, when I went to fetch groceries at Albertson’s 3.7 miles away.

I resolved to get a 3-4 days supply of food, including a couple of heavy items like a half-gallon of milk. I went around the store, filled up a whole shopping basket to capacity, and then loaded up the Nashbar side bag after checkout. Then off to home!

If only it was so easy.

First of all, a basket worth’s of groceries barely fit into the one bag. Two would have been better, especially for better weight distribution on the bike. More problematic was that without a “full” rear rack that extended all the way down to the chainstays (vs. the cantilevered seatpost-mounted one I was using), the Nashbar side bag was bowing in enough to graze the rear spokes on occasion. Not good.

I ended up getting home, but it took more than 20 minutes to do so (versus the 13-14 minutes to get to the store) due going slower with this problem and having to dismount to rearrange things a few times. When I arrived at my house I weighed the bag of groceries. 17 lbs. That doesn’t seem like that much. Heck, in Vietnam people were carrying 50-100 lbs. of stuff on the back of their little scooters with no problem; 17 lbs. should have been cake!

The next week I then ran an errand in Old Town utilizing a cheap new U-lock for the first time. Unfortunately, on the way back I lost half of the u-lock by unwittingly not removing the key from the lock (which subsequently unlocked and caused half of the u-lock to fall off somewhere). Another “commuting failure…”

Ok, so I don’t have the ultimate commuter bike yet. Some fixes are in order. Yet, it has been nice not having to depend on my carbon monoxide-producing vehicles all the time. Stay tuned as I update this page occasionally throughout the year.

Click here for the evolution of the Ultimate Commuter Bike 2.0.