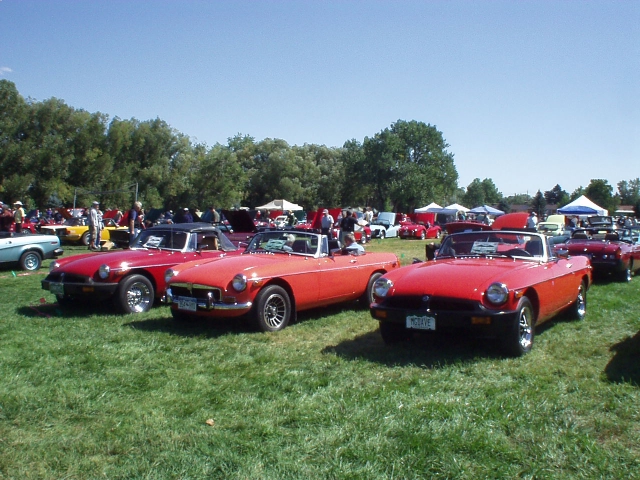 The weather the last few days in sunny Colorado has been about as erratic as Jake Plummer’s passing for the Denver Broncos, going from temperatures in the comfortable mid-80s on Friday to windy, bone-chilling 50s on Saturday. Happily, though, the weather gods were smiling upon us on Sunday as I embarked on a road trip down to Arvada, motoring al fresco of course.

For what reason? Why, there was an all-British car show! I haven’t been to one since MGs by the Bay in May 2005. I had no idea what to expect but was hoping there would be a good turnout of cars.

I was not disappointed. The show turned out to be huge—almost as large as the annual All-British Car Meet in Palo Alto, which claims to be the largest in the nation. All of the major British marques were included, from pre-war MGs to royal Rolls Royces to the latest Loti. All this in Arvada’s Oak Park, where the trees were just starting to turn fall colors and a light breeze was rustling the leaves.

Unfortunately my camera batteries died after taking a couple of dozen photos, but I was able to take quite a few photos of vehicles I did not already have. Photos are here.

Are you having a 2007 show? When & Where? Love Colorado and have just finished a long restoration - 1961 Alfa Spyder. Planning to tour my favorite area in the late summer early fall. ↩Reply