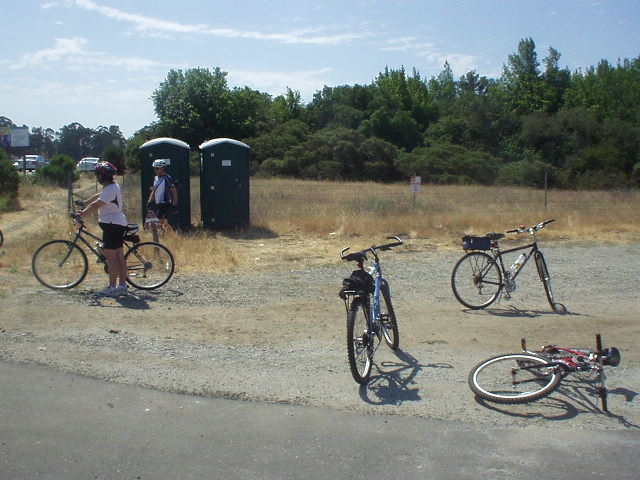 Never mind that “The Tank” is heavy, slow, and has been ridiculed by my own self on countless occasions. It is also 1) indestructible, 2) has only gotten one flat tire in an entire decade and almost 3000 miles, and 3) is also the only bicycle I still have in California. So when my friend Peggy mentioned she was doing the Giro di Peninsula 100km bicycle ride over the weekend, off came the cobwebs and The Tank was back on the same lands I had first ridden it on ten years ago.

We met up with Peggy’s friends Alicia, Ambrose, Arik, and Janet at the start in Foster City, California and off we went. All of them, it seemed, had other commitments (most notably, watching the Mexico-Argentina World Cup soccer game) in the early afternoon, meaning that they wanted to go fast and linger around rest stops as little as possible. “This is going to be a tough day,” I thought.

Nevertheless, after the first couple of miles I was pleased that The Tank was able to keep up okay, at least when I was going all-out. Indeed, as we cruised past the calm blue waters of the Crystal Springs Reservoir, the bike was keeping up well enough that I was able to taunt other riders while maintaining some credibility. “Hey you with the fast wheels!” I shouted while inching past Peggy and her time trial bike equipped with Zipp carbon wheels, “come on!” “Man, that is about the 10th time you passed me!” she replied in mock lamentation as she pulled back in front of me.

By Mile 15 I started acting even sillier. “One good thing about a mountain bike,” I told Peggy, “is that it can ride off-road.” As to demonstrate, I swerved onto the dirt and gravel shoulder and passed a few cyclists who were riding on the road a few feet to my left. “Um, I don’t think they appreciated that,” I thought after I made the pass.

Then on the climb up Page Mill Road to Moody, I went by a number of road cyclists. “Hey, this thing can climb… sort of,” I thought as I stood on the pedals out of the saddle (something I had to do often).

Perhaps it comes as no surprise, then, I paid for this erratic behavior in the second half.

My quads particularly paid a price in soreness as they had been doing almost all of the work due to the lack of clipless (or even toe-clipped) pedals, preventing me from pulling up or back. Peggy was quickly out of sight and this time my chances of catching her were about as great as my ability to win an Olympic medal in sumo wrestling.

At least she waited for me at the next rest stops, being the wonderful woman she is. It did amaze me at just how quickly she could ride away from me in the last leg of the ride. Was I just that weak? The answer seemed to be a resounding yes as a whole peloton of chubby people and their grandmothers passed me like I was standing on the side of the road watching bees mingle with the birds.

In due time I was back at the Bay Meadows start/finish where Peggy waited for me with a smile on her face. She had a good time, as did I. “I was surprised to see that you actually got tired at the end,” she remarked. I grinned back and muttered something about my weary quads.

At the end we were served up delicious food like leafy salads, rigatoni with pesto and linguini with marinara. There was even a little car show at the finish featuring maybe half a dozen American classic cars, though my eyes (and legs) did not venture towards them for more than two seconds. After all, a plate full of Italian food under sunny skies after a 60-mile bicycle ride with a beautiful girl already made for a perfect day, even without the four-wheeled distractions.

Also, here is a map/route sheet (PDF) of the ride.