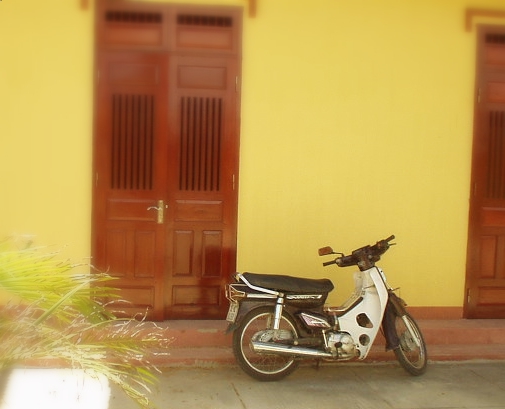 One thing I always look forward to when visiting foreign countries is checking out the different vehicles. Roads in the U.S. crumble under the weight of minivans and SUVs; Italians favor small, sporty runabouts in addition to their scooters and motorcycles; and in China the only automobiles dicing it up with the bicycles and buses are four-door sedans. What is Vietnam like? Sort of a combination of all three, but dominated by scooters and step-thrus.

After bumming a ride on the back of scooters in Vietnam more times than I’d care to admit to my life insurance agent, I’ve become big fan of them. At least for the city and in non-rainy weather, the Vietnamese demonstrate they are really all you need. It’s amazing what they carry on their motorbikes—pipes fit for the local water company, boxes the size of a 30-inch TV, even three people at times. They are highly maneuverable, occupy far less space on the roads than cars, and are extremely frugal, achieving 70-160 miles per gallon!

The step-thru Honda Dreams—the world’s all-time best-selling motorcycles—are ubiquitous here, with classic lines that suggest “motorcycle” as much as “scooter.” I really like them, along with the Honda Super Cubs. It seems like most of the other manufacturers have shamelessly copied the lines of these two to a certain extent. Honda has as much of a vehicle monopoly in a country that you’d ever see. There are Yamahas and some other brands, but not nearly as many as Hondas.

On the car front, like China there are only automobiles with four doors. Do not even bother to look for a coupe or a convertible; seeing one is like picking all six correct numbers in the Californian Lottery. At least I have yet to see one. The cutest and most distinctive car is the Daewoo Matiz, with its stubby body and round goggly eyes. It is to Vietnam like what the Renault Twingo is to France: sort of a national icon, except it is Korean (and owned by General Motors). Despite their diminutive size they even make up many taxis here.

More common are Toyota Corollas. They are about as commonplace as Honda Civics are in the U.S. The country has some SUVs, but the only one I recognized was a Ford Escape.

Driving here requires the reflexes of a video-game junkie, the split-decision instincts of Donald Trump, and a stomach as strong as Anna Kournikova’s. Forget traffic lights (which are few and are largely ignored), lane lines and a sense of driver courtesy. The latter can be summed up as “I honk at you!” or “I did not hit or run you over… what a lucky day!” Instead, the rule of the road is: be aware at all times what others are doing, and then play Frogger. To Americans, “Frogger” most often conjures images of the poor pedestrian trying to cross the road, but let me assure you it applies even moreso to Vietnamese motorists.

This is because drivers here are constantly predicting what others are doing and mentally project with an astonishing accuracy the safest (ha!), most efficient way around them. While this results in absolutely nobody driving in a straight line for more than two seconds and an orderliness inferior to that of an ant farm, it is testimony to the skill and judgment of the Vietnamese motorist.