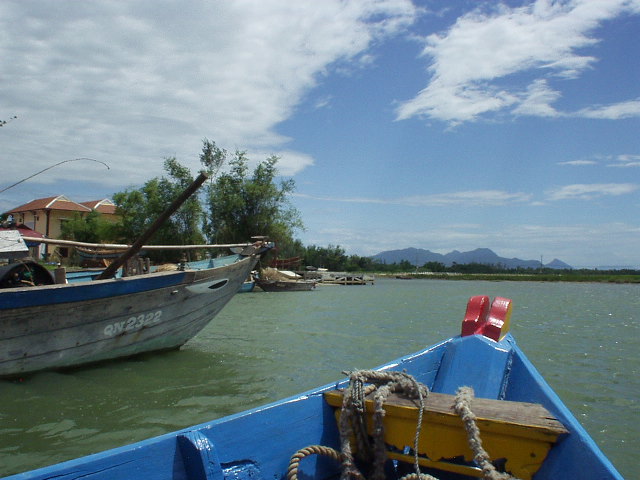 Before the title of this post raises any eyebrows or gives anyone a stroke, please let me clarify: no, I do not have a son. Or a daughter, for that matter. (Though I became an uncle the day before I left for Vietnam!) Rather, My Son refers to a World Heritage Site in Central Vietnam near Hoi An, where I am typing this from. I went on a tour of this place this morning. Here are some notes:

The most spectacular (supposedly) parts of My Son were bombed out during the Nixon years of the Vietnam war. Other parts remain, but they were mostly brick ruins that did not particularly impress me, perhaps due to ignorance as to their significance. The tour guide was not of particular help. First of all, he kept disappearing, and the three or four times he did try to communicate something (“laadiees and genntlemennn…”), it was hard to understand him. Oh well. At least the scenery was nice, with lush forests punctuated by sawtooth-shaped mountains, and I got some hiking in particularly because there were not enough vehicles to transport all of the tourists from the entrance to the ruins (about a mile). The weather was nicer than yesterday—very breezy and less humid with a touch less heat.

The best part of the tour was after visiting the My Son ruins. That is because we hopped back onto an air-conditioned bus over to a boat, where we had lunch (rice with cabbage and something resembling chopped-up egg rolls) while motoring across and muddy-but-calm river. Please don’t ask me the name of this river, because again the tour guide was of no help. Well, at least he was smiley, if not particularly verbose. Anyhow, the boat ride was very pleasant—as long as you ignored the engine that sounded like a muffled jack-hammer—and we went over to Kim Dong, where boats and other items were made out of wood.

From there we were deposited onto the harbor of Hoi An, and then told, “Just walk back to your hotels!” Mass confusion then erupted as most of us had no idea where our respective hotels were, but at least we had the rest of the day to wander around and find them. I really had no idea whether I was one, two, or three miles away from mine, nor was completely sure of the direction, so I ended up waving down a scooter guy, showed him my hotel key, and then bummed a ride on the rear of his machine for 15,000 dong (about 93 cents).

Not a bad day. Now, over to find some dinner, and maybe take a dip in the pool.

It's funny how I landed on your site. I was looking up some information on a Chinese actor for my mom and stumbled upon your site. I've been debating about going to Vietnam for the past several weeks. My grandmother lives there still and I am longing to go visit her. Only problem, I've never been to Vietnam and am a bit intimidated about going by myself. After reading the information presented on your site, it doesn't sound so bad. Nice work! ↩ Reply