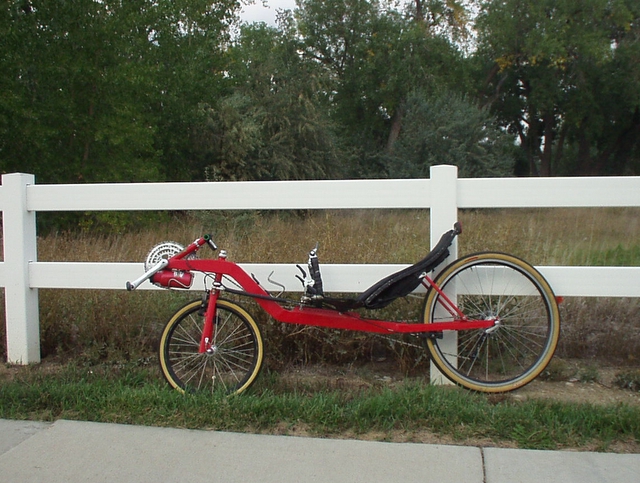 Slowly but surely my vehicles are getting back on the road. This weekend was Venise’s turn—a.k.a. Reynolds Wishbone #35, or simply “the ‘bent.” Perhaps you are wondering, why did it take so long?

After all, its last ride was almost 1.5 years ago, during the Lodi Sunrise Century. A couple of months after that 100-miler, I sold the home in Fremont, dismantled the recumbent, and embarked on the Great American Road Trip. Upon settling down in Fort Collins, I gradually reassembled the bicycle, but never completed it. Until now.

The problem was a lack of parts. After breaking multiple parts on the Cannondale—notably a Campagnolo crankarm and rear derailleur—I “borrowed” these from the ‘bent. For years! In fact, just in order to participate in the Lodi Sunrise Century, I had to “borrow” them back. I never bought replacement parts because I was waiting to make some upgrades to Canny anyhow such as new compact crank, 10-speed drivetrain, and lighter wheelset anyhow.

Actually, I am still waiting (particularly for Campagnolo to release the new UltraTorque compact cranks). But I decided enough was enough and I might as well get some parts for Venise while the weather is still super nice. Since her right Campagnolo bar-end shifter was badly damaged in a crash at the end of the 2001 Tierra Bella Century and wasn’t 100% compatible with the rear Shimano cassette, I got a new pair of Dura Ace bar-end shifters. A Shimano Deore derailleur went on the rear, and out went my cassette shims. I found a left Campy crankarm on eBay and voila—Venise is completely functional again!

In the late evening I rolled Venise down the driveway when some of the neighbors’ kids came over on their little bicycles. “Nice bike!” one of them explained. “How do you ride it?” asked the other. I replied, “I’ll show you!” as I clipped into the Speedplay pedals. Fortunately, as I pedaled away I did not fall over in front of the kids, so they did not end up busting a gut laughing.

I had to dial in the rear derailleur a little bit but otherwise shifting was good now that it was all-Shimano in the rear instead of a Campy/Shimano kluge. I pedaled off towards the sunset over the mountains with a grin on my face as I was reminded at just how comfortable and FUN this machine is.

More photos are below. Happy cycling!