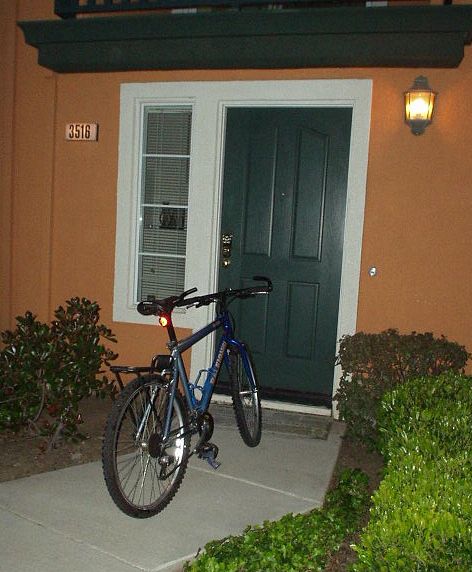 After 4 years of being on loan to my cousin, The Tank returns, intended for use as an eco-friendly commute vehicle. It gets its name from being virtually indestructible; e.g., just 1 flat tire in 7 years and about 2500 miles. It also has survived a crash or two with nary a scratch going down Mission Peak in Fremont, CA.

Raleigh UK has a long an storied history, producing bicycles since 1898. Unfortunately, due to financial troubles, the company stopped manufacturing in volume shortly after the start of the new millenium. Raleigh now seems to be back on its feet because I’ve seen several shops recently that sell Raleigh bicycles once again.

In 2006, my Raleigh M300—despite residing (the bike, that is) in California the entire year—engaged in a number of adventures. First was trying to keep up with Peggy and her time trial bike in the 100-km Giro d’Peninsula, The Tank’s longest ride ever. Then during a 3-week period in October when I was visiting people in CA, the bike performed about 200 miles of commuter duty. The Tank and I also did a gorgeous 28-mile mountain bike ride in Stevens Canyon with Ken and Jim.

I also have a tank. Mine is named Frank the tank. Same frame (Raleigh mountian), it is the ultimate commuter bike. I bought Frank off ebay, very cheap. I feel bad that I paid so little. Frank came with many great top of the line components. I have STI shifters, slick tires, drop bars, mirror, fenders and rack. I rode Frank on the Sea Gull Century last year during a Nor Easterner. The vast majority of riders opted out of this century because of the weather. I rode the 100 miles on Frank and had the best bike out there for the conditions. I saw and rode with many people on bikes that cost thousands that wished they were on Frank. ↩ Reply