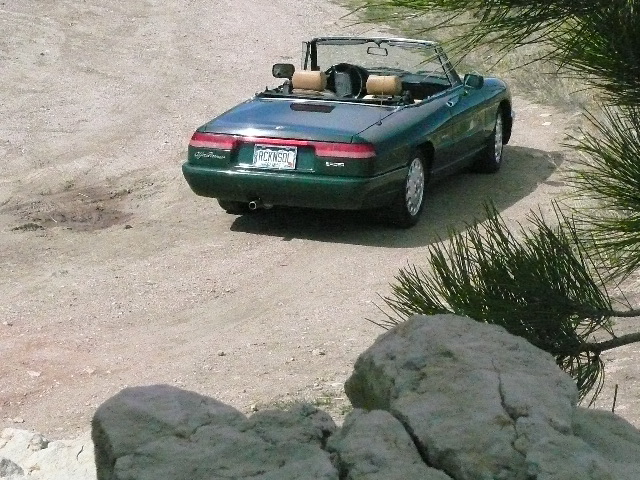 Top Gear‘s Jeremy Clarkson may have the fashion sense of a junior college student in the 1970s, plus being British and all, he loves to make fun of us Yanks. Yet, when it comes to automobiles, he is widely respected as an authority, a connoisseur, i.e. Someone Who Knows What He Is Talking About.

Most of the time, anyhow. For some reason, he has a habit of dissing my most beloved car marques. For example, when MG went bankrupt (again), he basically declared good riddance to a “stupid car.” Then, during the £1500 Top Gear Porsche Challenge, he gave James May a good ribbing about his white 944 that looked just like my old Turbo.

But—finally!—Clarkson was seen actually defending the marque of the car I currently drive: Alfa Romeo. On a recent episode of Top Gear, he stated:

I’m afraid there’s been an argument in the office. You see, us three, we maintain that Alfas have a certain flair that you just don’t get with other cars. And you can’t be a true petrolhead until you’ve owned one.

Yes. But the producers argue that all Alfas are ugly little rock boxes and that you have to be galacticly stupid to buy one.

And James May explained:

So what we did was they gave us each 1000 pounds to spend on an Alfa Romeo and they told us to meet in a car park near East Anglia where we’d be given some challenges.

Now, if you think this cheap-o challenge involving Italian engineering could not possibly end up being anything but a total disaster (just £1000—that’s only about $US1600!), you might be surprised. In fact, I’d say the cars were doing reasonably well—at least until the transmission and exhaust system of the Alfa Romeo 75 (a.k.a. Milano in the U.S.) gave out, the GTV’s clutch died, and the Spider’s water pump self-destructed.

But, as Clarkson would sum up the experience,

But truth be told, we were already winners. You see, if we had been in three normal cars, this would have been a drive across the midlands. But these three old crocks had turned into an adventure, laughter, mishaps, friendship, memories, thrills. That is petrolhead heaven. And as we’ve always maintained, the only way one can get there is in an Alfa Romeo.

Video of the Alfa Romeo Challenge

As of August 2017, it seems like the episode is no longer on Top Gear’s official website, but at least parts of it are on YouTube. Note that the videos can be taken down at any time. Watch them while you can.

Part 2 of the episode, officially posted by Top Gear:

Search YouTube for Part 1 to see if it is available.

Best line: “I can’t even look at the front of one of these cars because I get sexually excited.”