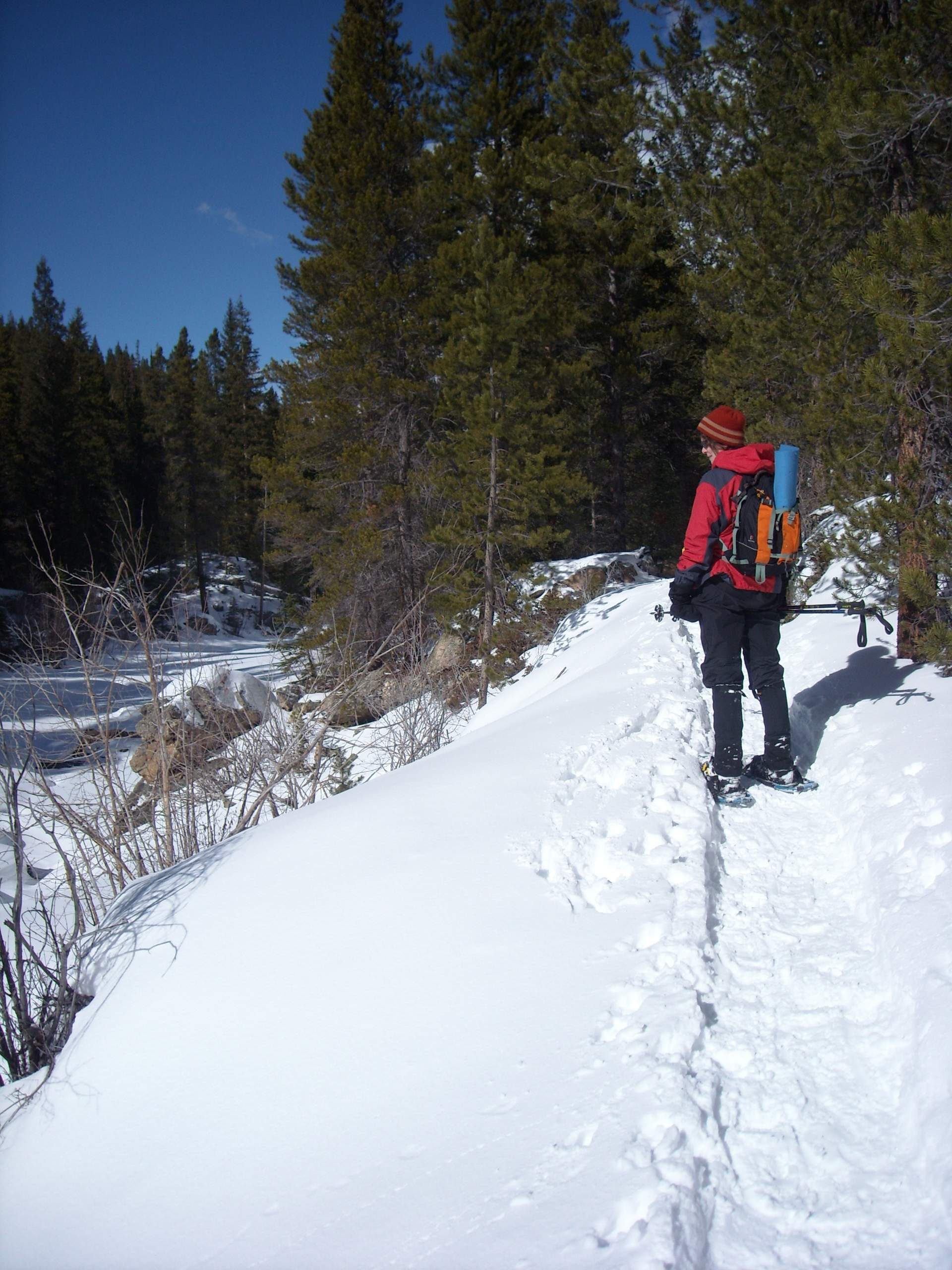 “It would be nice to go snowshoeing the next time I’m out here,” Tori said sometime during our Ouray ice climbing trip.

I agreed, but with the almost complete dearth of snow in Fort Collins since the first week of December 2008, we were going to have to go somewhere west in the mountains. Happily, we discovered a Fort Collins Meetup group that was planning just that—a snowshoe trip on the Big South Trail in the Poudre Canyon on Valentine’s Day.

It was a trip that was nearly called off. Weather forecasters the day before were calling for a Pacific storm to drop a few inches of white fluffy stuff on Fort Collins and Cameron Pass overnight, which could have made the drive up winding Highway 14 as treacherous as riding a unicycle on an ice rink. Ultimately, Laura (the organizer) declared the trip was still on albeit with a 30-minute later start, which was not a problem for any of us (I’m sure) as it just meant we could sleep in half an hour later.

It turned out to be a good call. The first 15 miles up Highway 14 from our rendezvous point (Vern’s Restaurant in Laporte) was covered with a thin layer of ice and snow but proved to be no problem for our two vehicles—Sue’s Toyota 4X4 pickup and my Audi TT Roadster Quattro. After that, the roads not only were surprisingly clear of snow but so were the surrounding hillsides of the Poudre Canyon. It was as if between 6,500-8,000 feet, no snow had fallen the night before.

Happily, though, at the Big South trailhead (elevation 8,440 feet) there was plenty of powder that was almost two feet deep along the trail. The trail itself was well compacted though and as Joe observed, “one probably doesn’t even need snowshoes for this.” Indeed, one could have gotten by with Yaktrax or maybe even a good pair of trail running shoes.

If Joe was disappointed by this, his spirits were buoyed when white powder started drifting down from the sky. “Yes, SNOW!” he exclaimed.

After a few miles and a couple hours of wandering around the woods like Big Foot, our leisurely hike became a Lewis & Clark adventure when the trail unexpectedly and abruptly ended at a large rock outcropping towering above the Poudre River by about 100 feet.

Note I did not say we were lost. We just did not know how to continue in a manner resembling forward progress. So we backtracked and then started blazing our own trails, post-holing eight inches with every step and resulting in a few slips and falls into the fluffy snow for Joe, who was weighed down by a pack of “40 or 50 pounds.”

We definitely needed snowshoes for these sections. However, a few newly blazed trails and much physical exertion later, we ended up at… the same rock outcropping we were at an hour before.

“Let’s have lunch!” someone declared. And so we stopped for 45 minutes to munch on colorful trail mix, juicy strawberries, York mint patties, peanut-butter-filled pretzels, and other yummies before commencing a trek back to the trailhead.

By this time, a glorious sun emerged from its hiding spot before some quick-moving clouds, although so did some mild winds coming from the southwest. The better-than-expected weather offered nice views of the Poudre Canyon and a truly pleasant, even spiritual, hike back to the cars that was only interrupted by the friendly greetings of other snowshoers who started their own treks in the early afternoon.

We got back to the original rendezvous point in Laporte by about 4:00 p.m., which gave me just enough time to fetch a fresh rose and get cleaned up before a wonderful Valentine’s evening with Tori. It turned out that the Big South Trail snowshoe trip was just the right thing to work up an appetite for an awesome dinner at Fish and great conversation with my best friend in the universe.