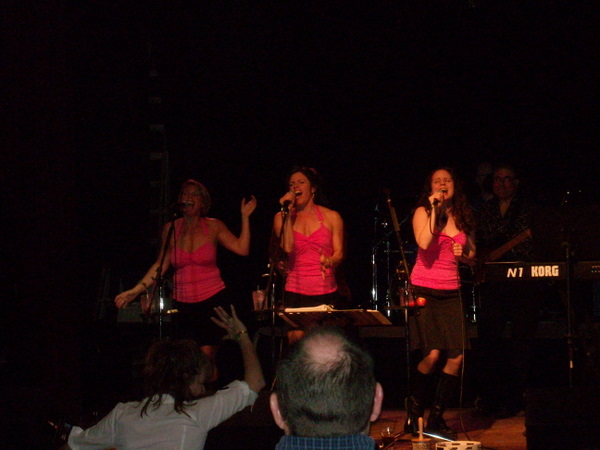 One thing I was looking forward to when I first moved to Fort Collins was having the opportunity to seeing my friend Adrienne more often. We had been great friends since 1998 despite living thousands of miles apart, and now that we both live in Colorado, it is a bit easier to visit.

It is kind of a shame, then, I hadn’t gone to hear Adrienne sing since she sang at a buddy’s wedding a few years ago. At least until now. She is really good. In fact, this was best concert I’ve gone to in many, many years!

This one was with Girls on Top, which Adrienne joined several months ago. What was particularly remarkable was that Kristin, one of the three “main” girls came down with the stomach flu the day before. So they had to bring in a stand-in at the last minute who did a good job considering she had never sung with Adrienne before. I probably wouldn’t even have known if Adrienne hadn’t told me the night before. They sang for about three hours too!

A bunch of friends from Fort Collins and Denver came to join me, including Ryan, Nick, Dana, Sei, and Corinna, and even they were amazed. I think they were expecting something more amateurish, like open-mic night, and not three babes (with guys on guitar, keyboard, and drums) who could totally dance while hitting their notes as well as Mariah Carey’s.

I’m looking forward to going to one of their next performances. As Adrienne mentioned to me during intermission, with Girls on Top, it’s like a big party!