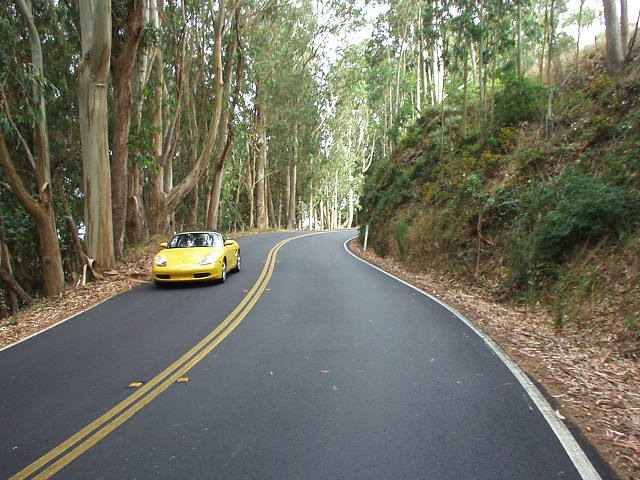 Second high-quality training ride of the weekend. Everitt and I had done the Santa Cruz Mountain Challenge with Steve the day before, and planned on doing the 200k course today. Actually, our main roles today would be to help Everitt’s friend-from-college, Duane, finish the 200k course. Duane planned on doing it in a previous year, but ended up doing the 100-mile course, and hence really wanted to fulfill this goal this time around.

We met at Everitt’s at 4:20 a.m. and packed up his Expedition which swallowed the three of us and our bikes nicely. Apparently, Everitt was not sore enough from yesterday’s hilly 118-miler, since today he planned on doing the “just rolling” 200km-er on his Cannondale mountain bike. I was very impressed. As Duane also was riding a Cannondale (the 2.8 road frame), we were a Cannondale squad today.

Anyhow, there was the task at hand: to get Duane to the finish. I pulled our group for the first 30 miles at 16-17 mph, which was comfortable to Duane, easy for Everitt, and just about the pace I wanted to go considering that my legs were fairly sore from yesterday’s intense ride.

In fact every time we got to a hill in the first 30 miles of the ride, I was fairly surprised by its steepness. The day before, both Everitt and Steve had made the hills sound extremely trivial, “just rolling.” After 30 miles I begged to differ. After 45 miles even Everitt was reconsidering his statements.

This is because the extra loop that comprised the 200k route was resplendent with hills, a few both steep and long. This was through the mountains and coastlands around Bodega Bay.

The good thing about this was that it woke both Everitt and I up (we both were suffering from yawning all morning), and in my case, seemingly gave me a surge of energy. From Miles 0-30 my legs felt flat, and from Miles 30-55, they felt more-than-flat… I was actually struggling. On one of the climbs in this loop, though (probably the most significant climb of the entire day in both length and steepness… almost rivaling that of Jamison Creek Rd. the day before), Everitt put the hammer down, and I stayed with him the entire time (we waited for Duane at the top). This really woke me up, and the rest of the day, I’d seem to get only stronger and stronger.

This loop was also significant in that some of the worst roads I’ve ever ridden in my life were here. I had to feather the brakes quite a bit and stay suspended out of the saddle because of the number of potholes; too bad, because most of the descents were non-technical. “Good thing I am riding my mountain bike,” exclaimed Everitt at one point.

As the first 3 legs of the 200k course (Miles 0-65 or so) were pretty hard (especially with the headwinds when there were no hills), we could only wonder when we’d get some sort of break, where the winds turned in our favor and there were more downhills than uphills. Thankfully, after Mile 65, we were not disappointed.

“The only major hills now come up at the beginning of the final leg… there are two of them,” another rider told us at a rest stop. “The first one is about .7 miles, and the second one comes right after it, which is 1.7 miles.” Quite a few others were also making something of a big deal out of these 2 climbs, “especially with the heat.”

Nevertheless, it was smooth sailing to these two climbs… and once we got to these climbs, they didn’t seem that difficult, especially when compared to the extra loop for the 200k course.

In fact, I was surprised when I got to the top of these, and was like “that was it?” Also, I had confused the 2 climbs for 1… the first climb is rather trivial in terms of steepness, and does come right before the 2nd one, with only a momentary reprieve. When I asked Everitt about “the 2 climbs” he was like, “oh, the first climb doesn’t really count.”

The rest of the ride was sunny and warm, in contrast to the chilly and overcast skies of the morning. The last 10 miles went through suburban areas with more cars, residential areas, and people; part of this went on a rather narrow bike trail adjacent to a highway.

At 5:15 p.m., the three of us rolled on in to the finish… congrats, Duane, on your first 200km-er. We actually were joined with another rider (one whom I met before the Santa Cruz Mountain Challenge the day before), who worked in Hayward, as a police officer. His story was that he got into cycling to lose some weight, get in better shape, and command greater respect from his fellow officers.

As with any ride worth paying for, there was plenty of food at the end. In fact there were so many burritos that the staff was pretty much begging us to take them away, so Everitt even brought some home to Janette, his wife. There was pizza, too, which definitely hit the spot.

All in all, an excellent ride in which, supposedly, there will even be a 200-mile option in 2004 for the California triple Crown. Looking forward to that.