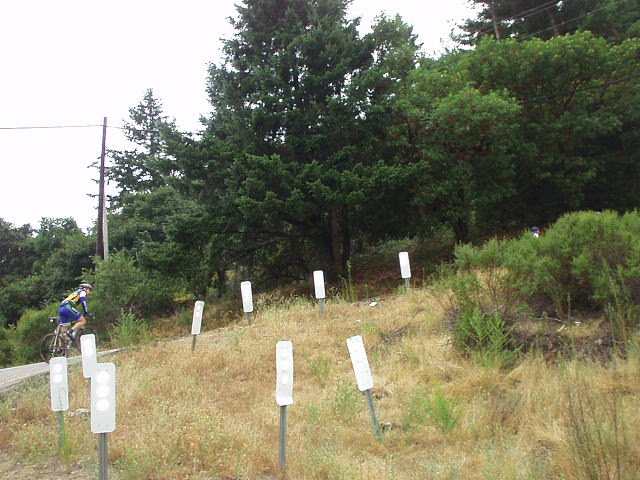 On Saturday morning I woke up at 4:00 a.m. to drive over to Santa Cruz for this challenging century of 10,000 feet of climbing. Over at the start I met up with Everitt and Steve, two friends from the Tri-City Tri Club. We were all very pleased that the weather looked far more promising than the cold and damp climate of the 2002 Santa Cruz Mountain Challenge.

We started riding together at 6:30 a.m., and as Everitt and Steve are two of our club’s strongest cyclists, I could tell this was going to be a fast-paced day. They did not disappoint… after having a nice conversation with Steve for the first 15 miles, we started to pick up the tempo, especially on the climb to the first rest stop of the day.

The rest stop, like last year, was well-stocked with scrumptious cookies and sweet-and-soft cakes. In about 10 minutes we were back on the road in short order. I took the lead, and shortly took us to the first hardship of the day.

A couple of miles from the rest stop was a turnoff to Soquel-San Jose Rd. There were arrows pointing left so without much hesitation, I turned left. I had not entirely remembered this turn from last year so I glanced down at my handle-bar mounted map… I didn’t see a left turn on one of the lines until Mile 28? Ah, but my cyclometer wasn’t turned on. And right then we passed a sign saying “Caution: Cyclists Ahead”. So we must have been going the right way.

From there I got a little more aero and enjoyed the road. It was all downhill. In fact, it was the most awesome descent of the day, with wide, sweeping curves on asphalt as smooth as a granite countertop. Now if only it was on-course.

“We’re OFF ROUTE!” Everitt suddenly shouted at me 6 miles after the turn. We stopped and I inspected the map. He was right. Apparently, I had turned us onto the 100km route. Whoops. And there was no question about switching routes as we all wanted some quality training here. So without hesitation, we turned around. Everitt led the way. To sum it up, it took 10 minutes to descend, but 45 minutes to go back up.

After getting back on course it was more uphill. The first major climb was Summit Rd., which is a pretty impressive grade at the very beginning. After that and the rest stop at Bear Creek, it was up and over to Highway 9 and 236 through Big Basin. We stopped off at the Big Basin Headquarters for water and a bathroom stop, and here I met another rider, Bob, who would be doing Paris-Brest-Paris like myself in a few weeks. He had done the Climb to Kaiser last weekend, too. The Climb to Kaiser, I thought, should make the Santa Cruz Mountain Challenge seem like a piece of cake.

Awaiting only about 10 miles ahead of us, however, was the real test of the day: Jamison Creek Rd.

Jamison Creek Rd. is both steep and sustained. Last year I was caught a little off guard by it, not having any clue as to how long it was, and struggled to just stay upright near the top. This year I was determined to attack the hill a little differently. The plan was to stay well within myself for the first 1.5 miles, staying calm and seated, and pick it up the last .5 miles, where if I was feeling good, go at my anaerobic threshold.

Well, it sort of went according to plan. The climb still is steep… probably the steepest sustained climb (>1 mile) I have ever done. It’s not quite as steep as some sections of Marin Rd. in the Berkeley Death Ride, but it is much longer. It’s about the same grade as the bottom of Sierra Rd. of the Devil Mountain Double, but the steepness is more sustained. Probably the climb closest in difficult to Jamison Creek Rd. is the Corkscrew Wall of the World’s Toughest Century. In both the Corkscrew and Jamison, there are sections where I was forced to stand, lest I start weaving or worse, fall over.

This year the temperature on the climb was 78 degrees which was just about as hot as I’d like it to get on such a slow climb. Everitt impressively powered up the road, and neither Steve or I could catch him. Steve was right with me until the last half-mile or so, when I shifted up a gear and started to stand. The climb has my respect.

At the lunch stop we enjoyed a nice meal of sandwiches, cookies, and fruit. “This is my favorite century,” Steve remarked. Indeed, every year on this ride there is great food and service, underscored by the lunch stop, in which a woman was singing and playing the guitar for us, and flowers were even set out on each table outside. Thankfully, this year the weather had cooperated, and unlike last year in which we had to huddle inside while the skies drizzled through a dense fog, we got to bask in the sun this year, with temps perhaps in the high 70s or low 80s.

After about 20-30 minutes in such luxurious settings (for a bike ride), we hit the road again and began our descent through the redwood forests of the Santa Cruz Mountains. While the descent was welcome, the roads were really really rough, strewn with potholes, and shadows from the trees camouflaging some of these irregularities. I was about at the limits of my comfort levels trying to stay with Everitt and Steve here, but was happy that this year, unlike last year, I did not lose them.

Eventually we got to the city limits of Santa Cruz, with flat roads and lots of car traffic. Here a couple of other riders either recognized my race bike, or myself, or saw my name printed on my California Triple Crown jersey, and remarked, “Hey, I’ve been to your web site!”

At Mile 96 there was a final rest stop which again did not disappoint. One of the cheery volunteers insisted that we have at least one piece (if not many pieces) of an absolutely delicious cake, as her husband had baked it, and earlier in the day she forgot to put it out on the table. So she needed people to eat as much of it as they could so that none was left when she got home and she could exclaim to her husband that “the cake was so good, all of it was eaten.” Steve, Everitt, and I were happy to oblige, helping ourselves to a couple of pieces in addition to some of the other yummy food at the stop.

The last 8 miles of the ride we took turns pulling, going a pretty quick pace to the Soquel High School where the ride ended. Steve would later remark that we were almost going too fast for him, but Everitt and I couldn’t tell as Steve had hung on just fine.

Outside the cafeteria, I ran into Lisa and Bruce, whom I met last year during the “Over-the-Hill Birthday Ride” for our mutual friend Mike. Today they had both done the 100k route, with absolutely no problem… apparently, Lisa had ridden up Jamison Creek Rd. four times in the last 2 weeks for training, and totally knew what to expect. Wow.

Inside the high school cafeteria we treated ourselves to a huge, freshly made chicken burrito served up by the volunteers; a salad; and ice cream. It was here that we met Joseph Maurer, another cyclist who had seen my web site, and hence sat down to talk. He was very inspirational: he did the Death Ride last year, and after an accident and rehab, did this ride as his first major ride since then.

All in all the Santa Cruz Mountain Challenge was a great ride with lots of friendly people, a challenging course, great food and fun. It is a must-do ride for any cycling enthusiast living in the San Francisco Bay Area, especially one who would like a nice local challenge. For Everitt and me, it would be part of high-quality training weekend, as we had planned on riding the Marin Century 200k the day afterwards; even when constituting a single-event weekend ride (as for Steve), it was a high-quality workout especially with the 12 extra off-course miles we inadvertently added on. The total distance we rode was hence 118 miles, which was “longer than Ironman distance” as Everitt pointed out–fitting considering that Everitt would do Ironman Canada in a couple of weeks while Steve would do Vineman (full-Ironman course) on the same day too. Funny how this ride hence was merely a “training ride” for our respective “bigger events”, but really, it’s a worthy event of being the highlight of one’s summer cycling season alone.

Thanks for this! I am a newbie rider and think I'll sign up for the metric this year. So far, I made it up and over HICKS in Los Gatos and up hwy 9 over to BC and back.

So...this helped me discern if I'd end up flattened like a pancake. I think I'll give it a go!