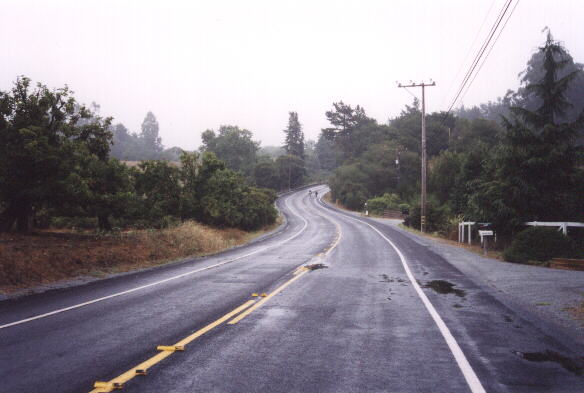 It was deja vu: I had just done a 71-mile hike through Big Basin and the Santa Cruz mountains the week before. And now, I return, with a similar sense of adventure, but with two more wheels and more speed to boot down many of the same roads: Skyline Blvd., Highway 9, 236, etc.

There was also the weather. In contrast to the weekend before, it was very wet! There was never a downpour, but there was often some sort of drizzle, and lots of dense fog. The temperatures were cool. The roads were slick.

Anyhow, short summary about the ride: there was quite a bit of climbing (10,000 feet or so in 100 miles), but everything before Mile 62 was not very steep. This included a long climb starting at Mile 5 or so, which was very enjoyable, with the fog actually cooling one off a bit. I was climbing generally well during these miles, in which I met up with some Tri-City Tri Club members at the rest stop (also saw Adam Paul there), and rode with them some miles. Actually, I’d lag way behind them on the slick downhills as I was taking them very conservatively (especially since my rear Cool Stop brake pads didn’t seem to be doing anything and Tri Club member JC almost crashed!), though I got a little ahead of them during the climbs through the Big Basin Area.

At Mile 62 or so came a climb that is deserving of the “Challenge” part of this ride’s name all by itself. It was Jamison Creek Rd, which is an 11% grade or so. However, that is only the average. It probably is 18% for extended periods in some parts. At least that’s how it felt like! I had to get out of the saddle and strain both my arms and legs to maintain 35 rpm in my lowest gear: a 32X23. I saw at least 4-5 people walking it. I was forced to go anaerobic and I never really fully recovered from the effort.

Thankfully, the rest of the ride was almost all downhill. This is where I got way behind the Tri-Club members again, not seeing them until the finish, but I was content just to cruise slowly down, having done all of the hard stuff already. It was a good time to be alone with my thoughts and reflect upon all of the neat things that have happened in the last few weeks. Oddly, this ride was one of the “easier” crazy events I’ve done in that time period!