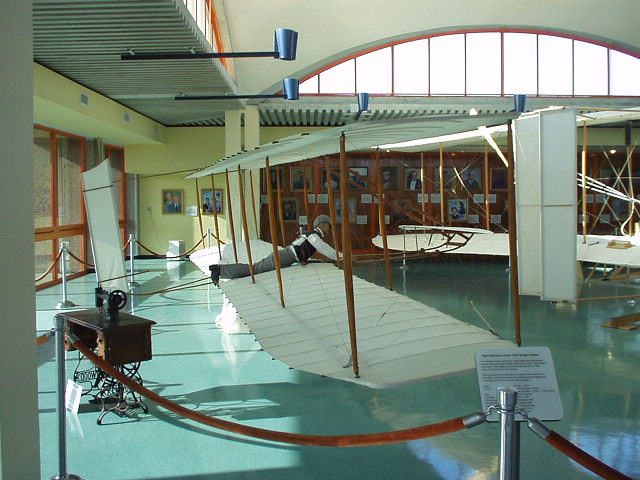 Did you know that there is a whole chain of islands off the coast of North Carolina? I did not, but apparently, one of these islands included Kitty Hawk, the famed site of the Wright Brothers’ first flights. For thiese reasons alone, I had to go check out the area while I was in North Carolina, even if it meant driving almost 250 miles from Durham.

The drive, while pretty, could have been almost anywhere in the states that are reasonably green yet sunny. And the closer one gets to the coast, the more “minor” the highways get and the more they resemble back country roads. I took US-64 almost all the way to Kitty Hawk, and US-17 & 64 back.

Kitty Hawk did not disappoint. Or rather, the Wright Brothers Memorial on Kill Devil Hill (the name of a hill that used to be a sand dune), which I think technically is part of Kill Devil Hills (the name of the town directly south and right next to Kitty Hawk). Why Kitty Hawk and not Kill Devil Hills is frequently cited as the site of the Wright Brothers’ first flights is beyond me, except that “Kitty Hawk” sounds infinitely more romantic and less satanic than the alternative. Anyhow, to see a life-size replica of Wilbur & Orville’s first airplane (and one of their gliders), and to see exactly where they held their test flights was all-inspiring. So was reading about these two brothers who, by any measure, were true renaissance men. They changed the world and it is amazing just thinking about how our ability to easily travel almost anywhere afar was predicated off of their crazy obsession about humans flying aloft like the birds.