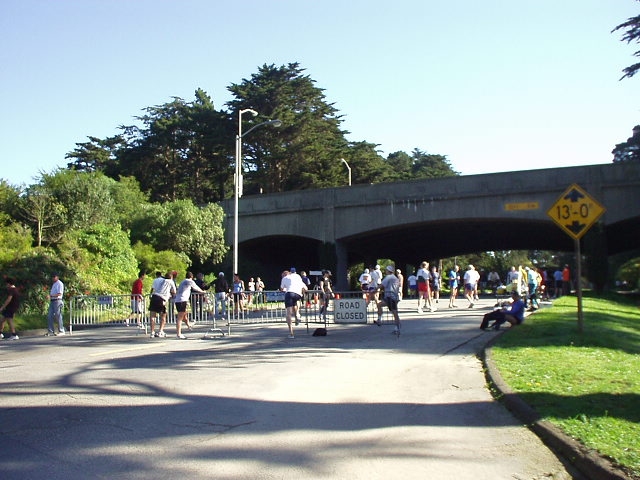 I had just done a 25-mile afternoon training run on Wednesday (which went badly) and the Knoxville Marathon was just a couple of weeks away. Hence, in accordance with my tapering plan, I wanted to do another short, fast run. The Rainbow Falls 5k fit the bill.

The Rainbow Falls 5k was yet another beautiful run through Golden Gate Park in San Francisco held by the Dolphin South End Runners. Due to having problems finding the start (corner of Kennedy & Transverse Drive) I got there just in the nick of time, even having to run to the start from my car to register (again, just $5), but that was fine as it helped warmed up my legs. This warmup may have been part of the reason that, for almost a full mile after the race started, I was in second place just about 2 feet behind the first place guy, alwhilst thinking, “I can’t believe how slow the field is starting…”

In fact, it did occur to me that I could have easily ran around the first place guy and experience the thrill of being at the very front of the field (of 100 for this race) for the first time ever, but didn’t for two reasons: (1) I knew that I would not be able to sustain this pace, and (2) I wasn’t exactly sure which way the course was going and did not want to lead everyone off course!

Actually, as it turned out I shouldn’t have needed to worry about the second reason since a bunch of the 6-minute milers would soon pass me before Mile 1. This bunch of people included a guy pushing a baby-stroller. I was impressed–especially since this course was not very flat, with a slight uphill at the beginning and some of the middle sections.

I tried my best not to fade and for the last mile I actually passed a couple of people (one or two of them might have been self-timers who started early; I’m not sure.) Once again it became easily apparent that the magic 20-minute mark would elude me for the finish time so I concentrated on the 21-minute mark. I ended up coming in at 20:55, or 12th place, or within 4 seconds of my 5k time at the Modesto Turkey Trot last November. Well, at least I am consistent…

Or sort of. After the race a friendly guy named Eduardo (who came in 4th overall) came by to chat and give a little bit of much-needed advice. “I’ve seen you around at these races,” he said, “and man, you take off fast! It usually takes me a mile to catch you!” He then advised that I try to start slower so I fade less after the first mile. I think I am going to try to do that for the next few races, especially for the long ones. We’ll see how it goes; I am still learning!