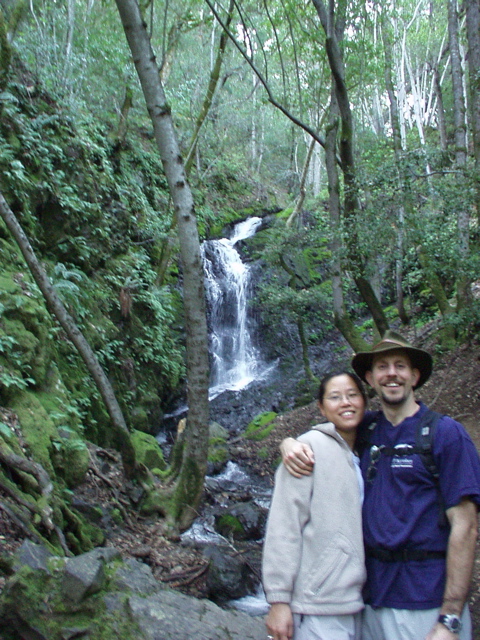 Did you know that there is a place in the San Francisco Bay Area with a notable amount of waterfalls? Neither did we, but the secret is now out. The Uvas Canyon Park in the South Bay (south of San Jose and west of Morgan Hills) has waterfalls, and there are many.

I met up with Adrian and Evelyn in South San Jose embarrassingly late due to getting lost, but fortunately they forgave me and we carpooled over to the Uvas Canyon Park through some backroads and arrived about 45 minutes later. To get to the park, one has to drive by farms, mansions, direlict outdoor structures wonderfully wooded areas. Most notably, one has to pass through Sveadal, a private resort belonging to the Swedish American Patriotic League. From external appearances, Sveadal looked like an upscale summer camp and included some tennis courts that some blondes in sportbras were playing at. It seemed like the quality of life was very high.

Indeed, when we parked and got out of the car, we were immersed in a world dominated by the sounds of rushing waterfalls. We only had to walk half a mile to see the first one. While not exactly Niagara Falls or even Yosemite Falls, we were both surprised and amazed by how many water falls there were. The nicest ones were about 20-feet high at the Black Rock Waterfalls.

Some of the trails were surprisingly steep, a couple of which had some pretty nice views of the areas well east of the park. There were signs out warning about Mountain Lions, but we never saw them. We only had a couple of hours to go hiking before dark so we did not get to do all of the trails; three or four hours probably would suffice to do all of them, however.

All in all we agreed that not only was it well worth it to come out here to go hiking, but that this was one of the nices county parks in the SF Bay Area. Photos are here.