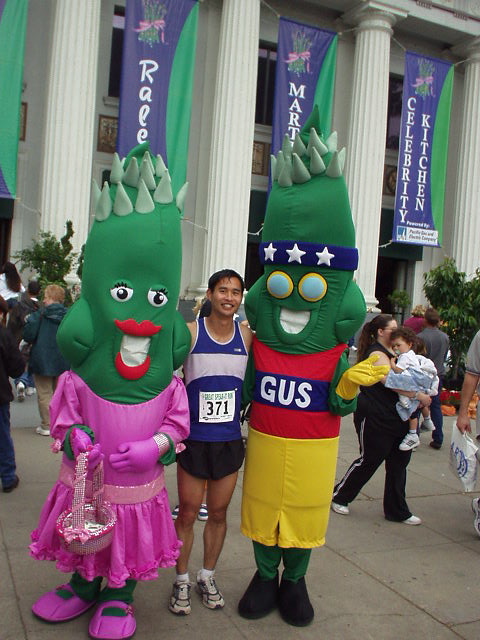 I was back in high school when I had last come to the Stockton Asparagus Festival 12 years ago. Back then, downtown Stockton in the southern part of town was best avoided, and the festival was held in a park among rural, grape-harvesting lands closer to Lodi, the neighboring town to the north. This all changed a year or two ago as the downtown area was revitalized, with a new movie theatre, new shops and restaurants, a grand baseball stadium in progress along the waterfront, and a police force more intent on making residents and shoppers feel safer. The festival was then relocated to showcase Stockton’s renewed hidden jewel.

In early 2005, I received an email from Tom, a recent transplant from San Francisco, who not only informed me of these new developments but added he was proud to “tell everyone [he] is a Stocktonian now.” In addition, he wrote me about the Great Spear-It Run 5k at the Asparagus Festival, which he himself was planning on doing. “Running and asparagus,” I thought, “those are two of my favorite things.” So coupled with the opportunity to do both in my former hometown (where my folks still live), in addition to being able to meet Tom in person for the first time, it became a must-do event.

The 5k run did not disappoint; click here for a full report. The rest of this article are impressions about the Asparagus Festival.

Parking in downtown Stockton is not nearly as abundant as the official website might lead one to believe, but not nearly as aggravating as that in a big city such as San Francisco. In fact, at 10:30 a.m., Tom and I passed by a makeshift parking lot which was charging $5, and it was completely empty–why pay for parking when there still were some spots along the streets still available for free? I did “lose” my car after the race due to not remembering exactly where I had parked it, but Tom was able to lead me to it, knowing where the furniture store I told him I parked near was.

Tom then took me on a mini-tour of downtown, in particular the historic Magnolia district. Within one year, Tom already knew more about this particular area than I did in 17. The Magnolia district is primarily residential, lined with 100-year-old Victorian homes shaded by oak trees at least as old. These homes were large, being multistoried and very possibly at least 2000 square feet. “Victorian homes like these in San Francisco,” Tom pointed out, “would probably go for what… 2 million dollars?” We then ventured to guess how much these in Stockton went for. $300k? $350k? I will have to ask my mom, who is a real estate broker…

The reasons for the low prices (by CA standards) include location and safety. When downtown was a dump, the location was certainly non-optimal. Now, I’m not so sure. This actually could be a great location now that commercial district has been (at least partly) revitalized; now safety is the main factor. Indeed, as Tom pointed out, a disproportionate number of homes had wrought-iron fences and window bars securing them, tantamount to a prison. While both of us felt completely safe meandering down the sidewalks during the late morning, graffiti sprawled along the sides of homes, lampposts etc. Even the signs proclaiming the historicalness of the area were not safe from the miscreants and their doodling.

Heading back to the festival, we passed by the new movie theatre that, invariably gets mentioned whenever a Stockton resident talks about downtown. I could now see what the big fuss was all about. A clear dome-and-arch structure, with its simple and elegant lines without looking the least bit pretentious, overhangs the entrance and is flanked by palm trees and trendy shops shops like Cold Stone and Starbucks. (Mom and pop diners had been pushed out of Stockton long ago, if they ever existed.) The theatre also has 16 screens. Tom says not too many people can be found actually going to them, but it’s probably just a matter of time when people do.

Back at the waterfront, Tom pointed out the new ballpark that is home to the minor-league Stockton Ports who played ball in it for the very first time the Thursday after this year’s Asparagus Festival. Much like SBC Park in San Francisco that was constructed maybe 5 or so years ago, it is theoretically possible to blast a home run into the harbor (if only the minor-league had someone like Barry Bonds). Beyond the ballpark is an arena where arena football is played. I’ve also heard from another Stockton resident that Stockton is in the process of getting a hockey team. Slowly but surely, Stockton residents will not be able to say “there’s nothing to do or see here”, a common complaint in the past.

Eventwise, the Asparagus Festival still remains the foremost event in Stockton, and perhaps the entire Central Valley. It takes place the entire last weekend of April, featuring numerous booths (only some with a sampling of asparagus) of food, local businesses and community organizations. Notable attractions included several celebrity chefs doing cooking demos in succession, the most famous of which is Martin Yan of “Yan Can Cook.” You gotta love this guy with his funny (yet authentic, he claims) accent and jokes, and non-cooking diversions such as cutting up a paper towel roll into “toilet paper rolls” to demonstrate the sharpness of his own line of knives. Normally watching someone cook food is pretty dull (heck, people want to eat the food, not watch it) but he makes it all very entertaining.

Outside the Stockton Civic Center (where the celebrity chef cooking was being held) included live music (including a group doing rather good Michael Jackson and Diana Ross numbers), the Got Milk BMX and skateboard guys, and a Food-4-Less driving range where a hole-in-one would yield $10,000 to the entrant. There were also some fine motor vehicles on display including a ’99 BMW M-roadster and some Harley-Davidsons. Click here to see photos of the event.