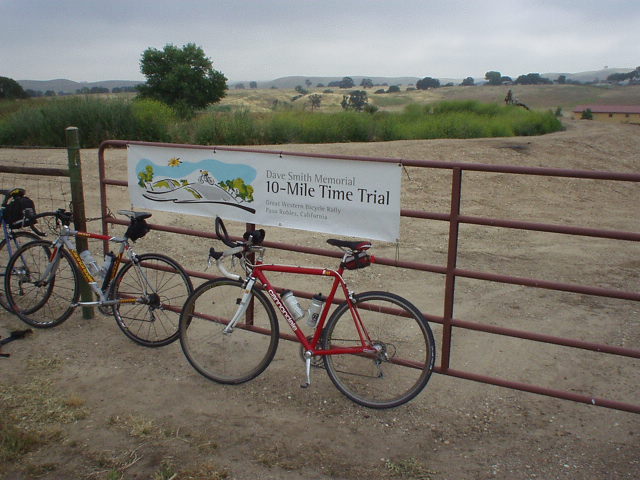 Bob, Sharon, Sharon’s friend Diane, and I went to Paso Robles during the Memorial Day weekend. We were there for two things: 1) the West Coast Kustoms (a 3-day hot rodding event including a Friday Night parade) and 2) the Great Western Bicycle Rally. Hundreds of cyclists camped out on every square inch of grass at the fairgrounds, but we stayed at the Templeton home of Sharon’s mom and dad, who were gracious hosts as usual.

On Saturday, Diane and Sharon did a 35-mile self-supported ride dubbed “Surprise at Spanish Camp”, whereas I did a 10-mile time trial. Afterwards, I test rode some carbon-fiber bicycles for the first time ever. Later in the afternoon, Bob came down from Fremont and the four of us went to the Concours d’Elegance Saturday evening. We capped off the event by doing the self-supported Vineyard Century on Sunday by following a route sheet provided by the GWBR organization.

Diane and Sharon reported that the “surprise” in their ride turned out to be a meager hill on a road named “Spanish Camp.” Perhaps a bigger surprise for them was how few other cyclists had chosen to do the route they did. “There was no camaraderie,” they lamented.

They did see quite a few animals. For example, at Spanish camp, they saw some buzzards circling in the air due to a dead fox in the road. At that point they also spotted some vultures. In addition, they spotted either a peacock (Diane) or an ostrich (Sharon). (Don’t ask me how they could confuse the two—and I cannot laugh at them considering I have called a turkey a “duck” in the past.) Finally, Diane swears she saw a buffalo, though Sharon said it was so small and hiding in the weeds that it could not possibly have been buffalo.

The start of the time trial was on Estrella Rd., 10 miles east of Paso Robles off of Highway 46. The course was 5 miles out-and-back, making it exactly 10 miles. Estrella Rd. was quite beat up but at least it was merely rolling, with no single hill that was really long or steep.

The time trial went well for me, hitting my goal average speed of 22.5 mph, winning my age group and finishing as the 4th male overall. Never mind that I (and the other 80+ entrants) got beat by a 13-year-old who was a USCF-licensed racer, but an 8th grader nevertheless.

After I finished the time trial, I talked with one of the organizers, a young woman who turned out to be the daughter of Dave Smith (the namesake of the ride). It turns out that her father had the record individual time for this time trial (22:40, I think, or an astounding 26.5 mph average), along with the tandem record with her uncle (20:19, or 29.5 mph average.) He passed away in 2000.

The gal was really cute, with curly brown hair and an alluring smile, so I talked with her a little bit more. It turns out she herself was not the stud-racer her dad was, but that she danced. (Seems like every dancer I meet is very attractive, and she was not an exception.) Unfortunately, I never caught her name. So Dave Smith’s daughter, if you are reading this, please drop me a line and at least tell me your name!

After the time trial I test rode a couple of brand new bikes while Diane and Sharon patiently waited. I was particularly interested in how bicycle technology has progressed in the last decade (my Cannondale frame is a 1992 model, after all). I test rode a Trek all-carbon Pilot 5.0–my first time on a carbon bike–and while impressed with its bottom bracket stiffness (with outboard bearings), did not really like the road feel (or lack of) rearward of the handlebars nor its upright riding position. Also test-rode a LeMond carbon-and-steel Versailles, which I liked better, if only because the road feel more approximated that of my own bike. The good thing about the test rides was that I came out of there with no desire to buy an expensive new bike.

Bob came down Saturday afternoon and later that evening we went back to the fairgrounds to vote for our favorite bicycles at the Concours d’Elegance. The concours had 5 different categories—recumbent, tandem, vintage, open, and unusual— so accordingly, there were many unusual bicycles. These included two 4-person recumbents (one with a trailer in tow), a recumbent tandem trike where the stoker faced rearward, a hand- and leg-driven “Walmart” mountain bike, and several vintage bicycles. Also at the show was a tire-changing competition where the winner, I think, won in 42 seconds.

On Sunday we did the self-supported century, which had approximately 5000 feet of climbing. It was both Bob and Diane’s first, and they both did very well. Congrats to both of them.

The route sheet warned that there would be 30-40 vineyards we would pass that “are pretty, but by the end of the route, you might be soured on seeing more grapes.” Indeed, the scenery was a little monotonous especially from Miles 15-100, which featured either golden hillsides and fields or rows of grapes. Not terrible, just lacking in some green.

The route sheet also had suggested rest stops every 25 miles or so, suggesting markets we could pick up food and water at. We also came within a 1/4 mile of Sharon’s mom and dad’s home in Templeton at Mile 35, so of course we passed on by. During the ride I consumed a banana, two slices of bread, a bag of trail mix, one Fig Newton, and water… that proved to be enough.

After the century, Bob, Sharon, and I did a hilly 5-mile run which ensured a good appetite for dinner.

In conclusion, Memorial Day weekend in Paso Robles is a great place for anyone who likes both cars and bikes; highly recommended.

Whoopee! I'm on vacation now! I forgot aboaut the C de E. My cousin went to Italy many years ago, visited the Cinelli Factory and had a Cinelli custom made for him. Too bad he's not around now. He'd love all the cycling opportunites! (Killed in an auto accident in the early 90's)

Nice pictues here. Reminds me of the fun I had last year.

Have fun at the Sierra Century. Isn't Slug Gulch Road part of your route?

Nancy- AKA the Bike Goddess ↩Reply