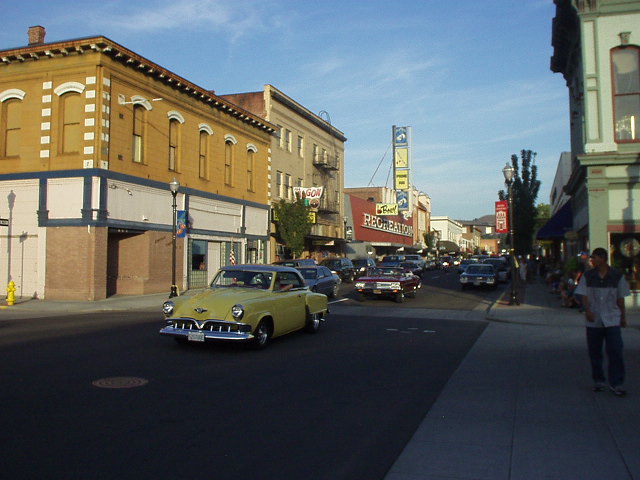 Every August there is a phenomenon that enlivens the Old-West-like town of The Dalles, Oregon: dozens of classic automobiles converge on the city for the annual Cruise the Gorge Event. Most of the cars were post-war American musclecars, but there were a few surprises.

Perhaps dominating the streets were Corvettes which came out en masse. I saw at least a dozen Vettes of different vintages, including several C5s (no C6s, however). Mustangs and Camaros were also popular. There were virtually no imports unless you count the two Alfa Romeos present.

You see, before leaving the Dalles, I dropped the top and impromptu joined the cruise, doing a full lap. This was the first time I had been in a parade either formally or informally, and it was a neat experience. “Hey look, an Alfa Romeo!” some spectactors cried out. Little boys and girls waved, while some adults pointed their fingers.

Midway through my drive, another Alfa joined in—a red, early 70s Spider. We drove side-by-side for only a little bit, with me shouting, “Nice Alfa you have!” and the passenger replying, “Yours too! But you are not supposed to have a bike on the back!”

It was all in great old-western fun in this family-oriented town. Perhaps better describing the event are the photos I took, below.

Hehe , well actually the imports came out later in the night. Till they outnumered the domestics. ↩Reply