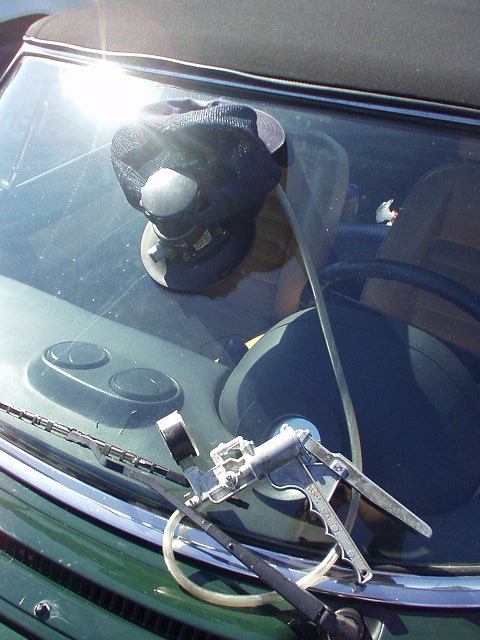 While drivng back from Yakima, Washington, I missed a turnoff and ended up driving back on a horrible section of Washington State 14, where construction workers were doing a (rather poor and irresponsible, in my opinion) road rework job, with loose gravel strewn across the entire width of the road. This stretch of road spanned 10 miles or so, and as if just driving down this road with no cars around wasn’t doing enough damage to the car already, everytime other cars would pass in the opposing direction, a ton of loose gravel would get kicked up and fly into the car. Finally, after several stones had hit the Alfa’s windshield, one of them caused a crack. I was able to console myself that at least the crack was not in the field of vision, and that the crack (shaped like a star) was only the size of a quarter. However, I knew from prior experience that the crack was likely to grow. So what to do?

The first thing I did after waking up the next morning was to find a windshield repairman in the yellow pages. The following sums up the experience:

Since I was near The Dalles, I called up Northwest Windshields which serviced the area and got a friendly lady on the phone. “Is the crack smaller than a dollar bill?” she inquired. A dollar bill?! Heck, my crack was a lot smaller than that. This was encouraging…

I then asked if I could possibly bring my car immediately to be repaired the same day, as I was just passing through town and wanted the crack to be repaired before it got any larger. “Oh, I understand,” was the reply, and the lady gave me the cell number of one of their technicians.

Upon calling, the technician (Dick) picked up right away, and I explained my situation. “Where are you?” he asked. “Just off of I-84 towards the south end of The Dalles,” I replied. “There’s a McDonald’s, Shilo Inn, and Chevron nearby–”

“Great, I am really close to there!” Dick answered. “Will head over there right now,” as we agreed to meet at the McDonald’s.

Turns out Dick wasn’t exaggerating when he said he was really close. He appeared right before I could even take a first bite of the breakfast burrito I had just ordered. Dick turned out to be a friendly, energetic guy who had been in this business for 14 years. He’s an amputee missing a right arm, but didn’t seemed disabled in any way. I really admired his handiwork.

He even explained the process as he was doing it. The repair consisted of 3 steps:

At the top of this page is a photo of the vacuum device from Step 2.

Actually, the difference isn’t as dramatic as the photos suggest, but it is a big improvement. The crack is much less pronounced and the “offshoots” of the star pattern are only noticeable as shiny slivers (appears like a scratch) at certain angles. The “core” of the crack also appears much smaller, kind of like the speck shown in the photo. Please excuse my crappy photography!

Most importantly, Dick virtually guaranteed that the crack would not spread. The repair job here in The Dalles took only 45 minutes and cost $40. MUCH better than needing to spend $500 (and having the car in the shop for a day or more) to have the entire windshield replaced. All in all I am very happy with the repair. If you ever need to get a windshield repaired in The Dalles area, give Dick a call (541-993-6511).

thanks for the words of caution . in addition to that, i have just been driving alongside a faster car (we were coming from the same direction) he passed me by and for some reason a tiny pebble came flying directly on my windlshield leaving a nick so tiny but ugly if you know it's there, but i don't feel so bad because a fix is possible. ↩Reply