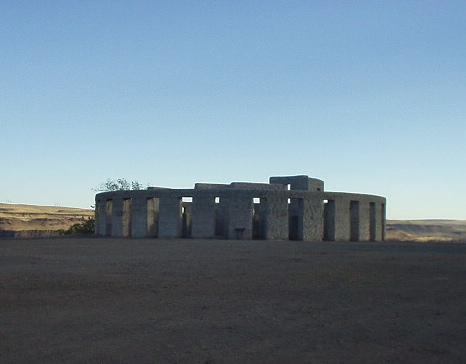 As both a World War II memorial and protest, Sam Hill, built a recreation of the original Stonehenge (of Salisbury, England) in the backdrop of the desert of Maryhill, Washington. Having seen the original during a UK driving tour in 2000, I was especially interested in seeing this one as it was how Stonehenge supposedly looked like during the Neolithic and Bronze Ages before 4-5000 years of decay.

There are several theories as to the initial purpose of the original Stonehenge, perhaps the leading one being that as a midsummer (i.e., summer solstice) sunrise marker. Nevertheless, what particularly moved Sam Hill to build his replica was the mistaken notion that human sacrifices were carried out there to appease the gods of war. Hill hence wanted to remind people “humanity is still being sacrificed to the god of war.” Furthermore, the original Stonehenge signified (to Hill) that human’s desire to have no wars went way back to many thousands of years ago, and he wished that World War I would be the war to end all wars. (Sadly, this obviously did not happen.)

Some interesting tidbits about Stonehenge at Maryhill: