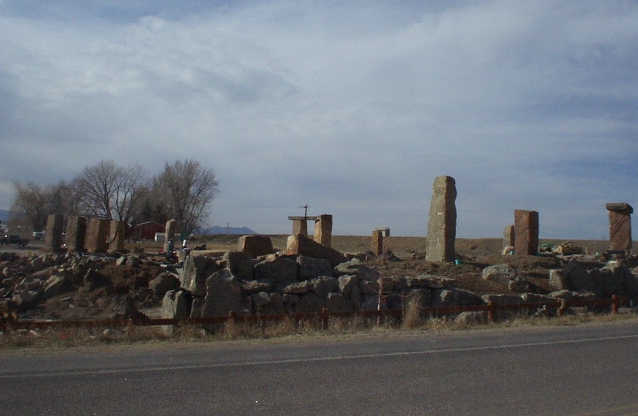 “Hey, what is that?” asked my friend Lisa during her visit as we drove over to Old Town. “Looks like Stonehenge!”

The original Stonehenge, of course, is a rock outcropping near Salisbury, England. There also is at least one reproduction of it in the world, in MaryHill, Washington. But one in Fort Collins?

It’s true! Well, sort of. Right now there are several large native moss rock stones near the north city limits of Fort Collins on the southeast corner of North College Avenue and Terry Lake Highway 1, some of which are erect with flat rock slabs on top. But Jim Striggow—the owner and creator of this project who got his inspiration from a visit to the original Stonehenge in 1996—is currently having some landscaping crews complete the rock garden. It is not meant as an exact re-creation, I think, but rather a place where visitors “will enjoy the aura of peacefulness, mysticism and a place of unusual beauty.”

I pass by this corner virtually every single day and indeed progress is being made at a seemingly rapid pace. Word has it that Mr. Striggow may have it open as part of his business in late spring or summer 2006.

“I wonder if you’ll get your own Big Ben too,” joked Lisa in a followup. Heh, yes, that would be great!