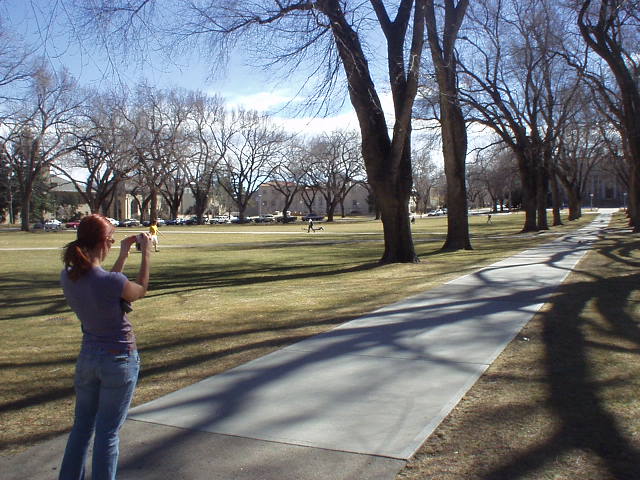 I smiled at my friend in bewilderment as an enthusiastic, sweet-smelling woman working for the Lush Handmade Cosmetics store in Boulder, Colorado, began caressing my hands with a potent “Soft Touch Body Butter”. After all, Lisa—who had essentially dragged me in here—had been in Colorado for barely two hours and she already was getting me into trouble.

“See, doesn’t your skin feel so soft now?” asked the employee. I conceded that my hands—which are normally about as coarse as a reptile’s back—did feel as smooth as silk now.

Perhaps that was a mistake. The Lush Lady then grabbed me by the arm and proceeded to give me a whole tour of the store, extolling the efficacy of products with names such as “Youki-Hi,” “Tisty Tosty,” and “Honey I Washed The Kids.” It was particularly wonderful, she claimed, to take a bath with a “Sex Bomb” and the very feminine-smelling “Ooh La La Soap.” Ooh la la indeed.

“My boyfriend,” professed the woman who clearly was in the running for Salesperson of the Month, “is a big, buff, manly guy. And now,” she winked at me, “he wants to take a bath everyday.”

Okay! Now I had visions of being primped into a girly guy. Lisa, perhaps garnering some sympathy for me by this moment, did proceed to help me get out of there. But not until after generously buying me some Soft Touch Body Butter.

I could already tell this was going to be a fun weekend with one of my favorite friends from the San Francisco Bay Area.

Things To Do in Northern Colorado

For those thinking of coming out to visit and looking for ideas on fun things to do, here’s a sampling of some of the activities we did out here:

The last activity deserves some elaboration. Lisa and I decided to create some abstract oil paintings for my still-bare walls due to my theory that “it’s impossible to mess up—they’re ‘abstract,’ after all!” For similar reasons (harder to mess up), we painted on some of the smallest canvasses we could find: 8″ by 8″ squares.

After this experience, let me tell you that painting is more difficult than I thought. I began to realize this after, oh, one hour and my painting was merely a canvass brushed non-uniformly with a sickly brown color I had mixed and over-diluted with turpentine. I hadn’t even started on some of the other colors or elements of the painting, which were supposed to look like a collection of bicycle parts.

“Hmmm, maybe I should just leave the painting like this and name it ‘Brown,'” I suggested.

In the meantime, Lisa was making steady progress on her masterpiece dubbed “Tree.” Actually, I thought it turned out pretty well. Lisa, ever the perfectionist, would have none of that. Claiming that her painting was horrid, she even refused to sign her initials at the bottom. “You deserve credit for this piece of art,” I protested.

“Oh, I deserve credit for it,” she retorted. “But do I want credit? NO! It looks like a five-year-old painted this.”

I then gave a minutes-long counter-argument that her tree was much more sophisticated than what a five-year-old could have accomplished. I concluded that, in fact, her tree was at least seven-year-old level.

Later that evening at Panino’s, there were several drawings displayed at the register that were created by kids who probably were no older than seven years of age. Their artwork was actually quite a bit better than ours (or at least mine). So maybe I have to take back what I said. Next time, I told Lisa, we’ll have to do Paint By Numbers instead.

I have no problems with being outpainted by a seven-year-old. Just don’t call my artwork girly.