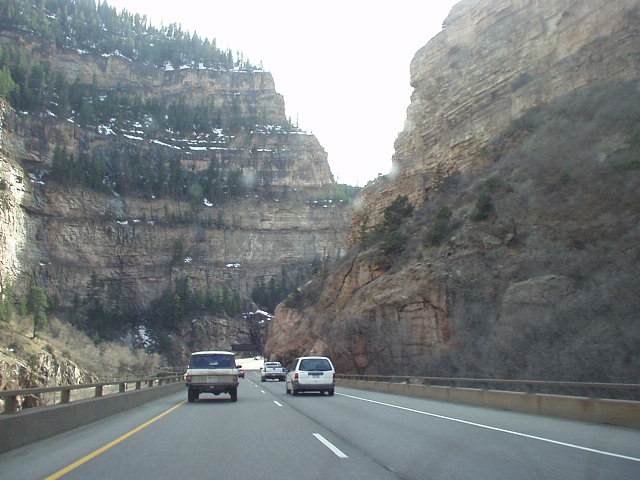 I was motoring down a narrow stretch of Interstate 70 and snaking my way around a chiseled, vertical slab of rock when a silver-gray roadster appeared in the rear-view mirror. As its brilliant headlights rapidly approached from behind, I thought “Boxster? Nissan 300Z?”

No, as it whizzed past with its tuned exhaust note in full fury, its sculpted rear quarters made it evident that this was nothing less than the new Pontiac Solstice. With its top neatly stowed beneath its slick twin-cockpit hardshell tonneau cover, the car surged through open gaps in traffic like a slot car, wind billowing through the hair of the driver who clearly was enjoying the drive.

This sight inspired me to drive the Alfa just a tad more spiritly as I reflected on what a fantistic drive this was. Starting around Breckenridge and extending well past Vail, the snow-covered peaks towered above as majestically as the Alps, with evergreen trees perched proudly through the white powder like the candles on an octogenarian’s frosting-laden birthday cake. More of a surprise were the landscapes further west. Glenwood Canyon resembled a mini-Grand Canyon that one drives through, followed by towns with imaginative names like Rifle and Parachute which were blessed with green pastures at the base of 8,700-foot mountains.

It was reassuring to see that the Front Range of Colorado does not have a monopoly of gorgeous views in the state. Click here for more photos.