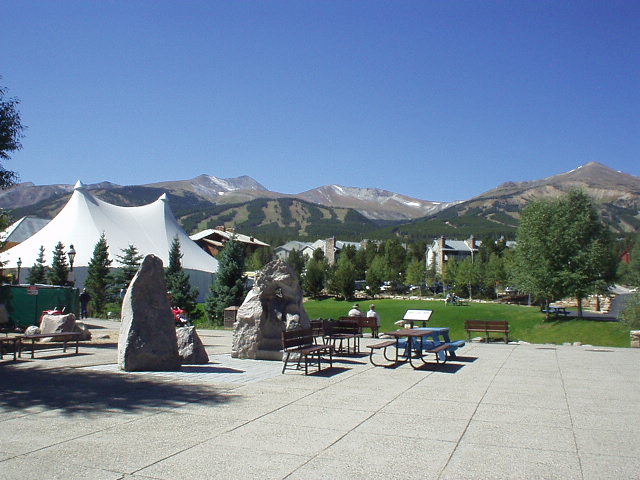 I went to visit Mike and Angela Sarmiento who very generously gave me a tour of Breckenridge, took me to dinner, and let me crash in their Airstreamer. Mike and I also did some cycling from Vail to Breck along one of Summit County’s numerous dedicated bicycle trails that thread through the mountains. Here is the full report.

Breckenridge is a mountain town situated at 9600′ situated in the heart of some of the world’s best skiing. Its full-time residents number 2600 people, but in winter, at the height of ski season, there can be 20,000 people in this town. It is very difficult to find local accommodations during winter, so if you plan on going, be sure to book lodging reservations well in advance.

Nearby towns (within 10 minutes) include Frisco, Dillon, Keystone, and Silverthorne. They all have roughly 1-3,000 residents.

What really attracted Mike and Angela to this town was how exceptionally welcoming the local people are here. They are both particularly outgoing and have made friends here very easily. The population, however, can be roughly divided into three categories: year-round residents (the locals), part-time residents who have 2nd or 3rd homes here, and “ski bums” (no derogatory connotation is meant here) who come here in season or live here for a year or two. In general, the population is very transient. The economy here is solely tourism and the service industry. Many people have 2 or 3 part-time jobs to make ends meet, though outdoor activities is given higher priority than work for most people.

One thing about Breckenridge is that men outnumber women by a 2:1 ratio (this ratio used to be even worse!) People in Breck have a saying for women: “the odds are good but the goods are odd.” I.e., there are lots of men around but some of them are “odd”, like the ski bums without a college degree and no job, etc.

That said, Breckenridge has another motto: “A real town. Friends welcome.” Mike reports that the locals even welcome Californians here.

Breckenridge has a nice downtown as does Frisco. Frisco also has a handful of “big box” stores including a “mini” Walmart and Safeway, both of which do not look like any Walmart or Safeway you have ever seen. This is because of strict architectural guidelines that Summit County has to keep the area looking like a mountain town. These guidelines include keeping logos small and buildings looking more like mountain homes than boxy stores or warehouses.

Silverthorne has a number of outlet stores, including Nike. Silverthorne also has a Target. I got the feeling that despite the small sizes of all of these towns, one could easily do all of his shopping in Summit County and would rarely have to go to other cities like Golden (~60 miles away) or Denver (81 miles away).

A big controversy going on in Frisco is whether to allow Home Depot to come in or not. Right now Ace Hardware, in Silverthorne, has a monopoly in the area.

There are quite a few restaurants in downtown Breckenridge and Frisco, but all are fairly expensive for food that can be described as “like Denny’s” (according to Mike and Angela, who both have fine palates.) There is also not a whole lot of ethnic food, although there is a Thai and Mexican restaurant in Breck.

Restaurants also tend to slow down in the non-winter months and also usually have to resort for “2 for 1 specials before 8:00” to get enough people to come in (at least this makes dining a whole lot more affordable). Locals also tend to get discounts both in restaurants and in stores. Service is very good here as the local businesses know that in these small towns word of mouth spreads very quickly and do what they can to get repeat business especially from locals.

Breckenridge (and its neighbors) is a haven for skiing, road biking, mountain biking, rock climbing, fly fishing, and kayaking. This is what Mike—who does all of this—had to say:

They have miles and miles of paved roads for cycling only. One of the best takes you from Dillon to Vail, along the river through a valley – a view that only cyclists get. It’s incredible. Makes me want to go buy a road bike. But I’m into mtn biking now. And there are tons, and tons, and tons of trails. Here in Breckenridge, you can buy a lift ticket and mtn bike down hill all day in the park, or, bike up and down all the different single tracks, fire roads, etc.

CO is an amazing state for outdoors people. They gear life to enjoy the outdoors, and people work ony 4 days here typically so they can play 3 days. Much better life balance. The avg. income in Breck is about $34K, but that is if you work for someone else. A lot of the waiters, bar tenders, etc. we have talked to make more than that b/c they have a few things going on – their job, their own business, some investment in real estate or other. A woman we talked to says you can make a lot more money here if you own your own business.

There are 6 other ski resorts around 40 minutes or less away (Vail, Beaver Creek, Copper Mtn, Arapahoe Basin, Keystone, + Breckenridge) and they are all owned by Vail Corp, so you pay about $360 annual ski pass (if you are a local) and can ski ALL the resorts.

Additionally, the Breck Nordic Center is THE best xc ski center in the US (according to my friend Mellen, who is a xc ski instructor from Yosemite and Mt. Shasta). Tons of backpacking, lots of trail running, or just plain paved, non-motorized running trails, good places to fish, etc. An absolute outdoor mecca.

He did mention that many former rock climbers he knows became avid mountain bikers instead, because it can be hard to find rock climbing partners out here with the population being as transient as it is. There are bouldering areas within 10 minutes of Breck and longer rock climbing routes within 1-2 hours of the area.

Real estate here is predictably expensive, but less expensive than I thought. For the views and environment that residents here get, in fact I thought real estate prices were pretty reasonable. This is what Mike had to say:

After 9/11, the Breck area real estate died. Before that it was getting up there, but then it stagnated and some prices dropped. The 1st qtr of this year, they finally saw appreciations—about 6% over 1st qtr 2004. So the prices right now are very affordable compared to Telluride, Vail, Denver, Boulder, and other areas of CO. My wife and I have done a lot of comparisons, analysis, etc, and we feel that our investment in RE here is better than our initial investment in our SF home. [Actual numbers deleted to protect Mike and Angela’s privacy]

Indeed, flipping through real estate guides reveal home prices that seemed way more reasonable than Jackson Hole, Steamboat Springs, Vail, and Aspen. One reason for this is that those towns have airports that the really wealthy can fly their private jets into. In Breckenridge, even celebrities have to drive there to get there as there is no private airport.

That said, most of the property in Breckenridge are large mountain homes with acreage or condos. Condos are very popular due to the number of part-time residents who do not want to have to deal with maintenance. Condos are expensive here but less so than the SF Bay Area.

This is what Mike had to say about the weather:

Breckenridge is at 9600 ft elev, so snow comes in October or November and lasts until May or June. At night in the summer, it drops to about 45 degrees. But days are no hotter than 80, and usually average in the low 70s. The economy dies for about eight weeks each year, about four in the spring after Easter when the ski lifts are almost shut down, and about four weeks in September and October when the summer ends. But, you get about 300 days of sunshine, and in April people sit in the sun on their deck (although it is still 40 degrees). If you need to get away from winter, just drive to Denver or a lower elevation for the weekend.

Mike and Angela certainly love it here, and I cannot blame them:

Can you tell we love it here? The more time we spend here, the more we love it. We know now that this place is home. I highly recommend you check this place out. Real estate prices are reasonable, the people are great, and the activities/scenery can not be beat.

We will see more as we head north, but we don’t think we will find anything that beats the combination of affordability, great people, great activities, strong economy, etc. that Breck has to offer. We could be wrong, but we seriously doubt it. We are both very well traveled, and this place beats out so many other places we have visited. Our only surprise is that it hasn’t been discovered yet. We are lucky that everyone else is going to Vail, Copper Mtn, etc. But those places are too snobby for us. This place is laid back and just our speed.

For myself, I concur this is one of the most beautiful areas I have ever seen near any urban center (i.e. anywhere with a nice downtown). My main reservations are that the winters might be a little too long and the population a little too small and transient for my tastes as a bachelor. However, those who love winter sports and are considering moving to places like Jackson Hole, Steamboat Springs, McCall, etc. should really check Breckenridge out. It is truly a near-paradise.