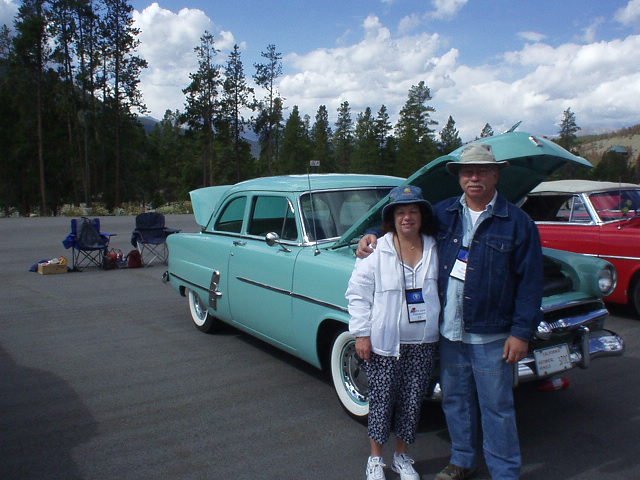 Last week Sharon had told me that her folks, Robert and Mary Jane, were going to be in Keystone, Colorado at the V8 Club’s Western National Meet. It turned out that they were actually driving their newly acquired 1953 Ford coupe with other V8 Club members all the way from Southern California, for a distance of 1200 miles (and then 1200 miles back after the event!) I admired their courage and sense of adventure (especially when I learned that their transmission’s overdrive was blowing fuses), and was more than pleased to be able to meet up with them at the Concourse d’Elegance today in which their car was being entered in the “Preservation” class.

The Early Ford V8 Club is an international club for owners of V8 Fords made from 1932-1953, dubbed the “Flathead Era”. Members drove (or trailered) their vehicles from as far as Connecticut for this gathering in the western U.S. In addition to the Concourse, there were other events, such as stopping by the personal collections of various members en route to Colorado (one guy had >100 cars himself!) and a car tour down to Leadville, CO (at over 10,000 feet above sea level) from Dillon/Keystone. There were even events for the ladies, such as a Ladies’ Luncheon during the Concourse where a professional chef demonstrated how to make a dessert that Mary Jane described as “very rich”.

There were different categories that one could enter his car in for judging. Robert and Mary Jane’s car was in very original condition, with still the original paint job and a never-rebuilt motor that had only 71,000 miles and apparently ran well (it made it this far!) Therefore, they entered theirs into the “Preservation” class, as opposed to the “Concourse” or “Touring” classes. In the Preservation class judges just looked at the car for originality, whereas in the Concourse class points were given (or rather, taken away) based on how “correctly” a car was restored to original specifications.

In addition to Ford coupes, sedans, woodies, and trucks, there were some Mercurys on hand and even a French Ford—a white/red 1954 Comete Monte-Carlo. There was also a Ford tractor! Unfortunately, as one member would say, “Colorado weather is terrible for a car show!” The problem is in the summer, Colorado often gets afternoon thunderstorms. They usually pass quickly, but creates havoc for the car show participants (especially those with open vehicles). On this day, the weather started beautifully, but rain clouds quickly moved in by 11:30 a.m. By 12:00 p.m. snow and/or rain was falling intermittently. By 2:50 p.m. it started pouring again and since the show was supposed to end at 3:00 anyhow, this was the signal for everyone to start packing up and leave the grounds of the Keystone Convention Center.

It was a good show and great to see Sharon’s parents out here in Colorado, if only for half a day!