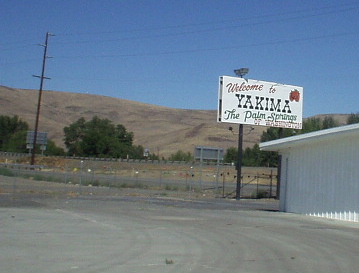 Yakima is “well-known for the 300+ days of annnual sunshine that enhances the variety of year-round recreational opportunities,” boasted the Yakima Vistor’s Bureau. “Yakima Valley is now a renown appellation of world-class wines and home to over 40 wineries.”

Intrigued (especially by the sunshine and recreational activities), I just had to check out this town of 87,000 people. Below are some initial impressions.

The Drive from Hood River, OR

Going east along the Columbia Gorge River on I-84 and then north on US-97, the scenery is mostly drab desert environment. One pleasant surprise, however, was going over the Simcoe Mountains about 60 miles south of Yakima, which were covered with lush forests of lodgepole pine. Up here the environment almost resemble Bend‘s. I camped overnight in Brooks Memorial State Park which is around here, and had a very peaceful night’s sleep.

Alas, the scenery reverts back to barren yellow/brown hillsides when approaching Yakima. The cost of having 300+ days of sunshine per year, I guess. Anyhow, near the center of town is a sign proclaiming “Welcome to Yakima: the Palm Springs of Washington”. This has been the subject of jokes and embarrassment among locals around here, and I could see why. Aside from the lack of green, the comparison is a little far-fetched. First of all, you will see no palm trees here. Secondly, though it does get warm up here in the summer, it does not get nearly as hot. For example, in Palm Springs the daily high in July and August is almost always over 100 degrees Fahrenheit. In Yakima, it only gets over 100 degrees once in a while.

In addition, the businesses and buildings in the two places are vastly different. Palm Springs is filled with resorts and posh hotels. Yakima is decidedly more downscale.

I took one of the first exits into Yakima and ended up on Main Street. Imagine every single fast food restaurant, grocery outlet, auto dealership, and large consumer warehouse you can think of, and line them up one after another. That’s Main Street in Yakima.

Main Street did, however, have the nicest McDonald’s I ever seen. Nice enough that I even stopped, went inside and purchased some oh-so-bad-for-me grub for breakfast. This McDonald’s had a 60s theme, a la American Graffiti, and at least the inside could have been used as a Mel’s Diner, with jukeboxes at every table. Some booths were even modeled as the front half of a Chevrolet Bel Air, and yes, you could eat in these! The bathrooms had Elvis and other 50s memorabilia, and there was a Harley Davidson decked out with flames (painted) on the floor that you could admire while awaiting your order.

Main Street led to 1st Street. Which leads one to…

This is what Wikipedia.org had to say about downtown:

The abandonment by retailers and other businesses of Yakima’s downtown core is symbolic of the city’s overall economic downturn. In the last five years, three major department stores and an entire shopping mall have closed for business. While several theories to revitalize the city’s downtown have been put forth by civic leaders, none has proven effective. The retail core of the city has now shifted to the city of Union Gap, where a renovated shopping mall and other new retail businesses are flourishing.

I had read this before going to Yakima and was half-expecting a downtown that feels “dead” like Knoxville‘s, but was pleasantly surprised. Far from looking abandoned, Yakima’s downtown is clean with lots of shops and even a few ethnic restaurants (primarily, of the Asian sort, like Thai or Chinese). There is even a theatre there (the Capitol Theatre, first built in 1920) that features Broadway-style shows (5 for $25, quite a bargain), concerts, and the Yakima Symphony Orchestra.

There did seem to be far less coffee shops than the downtowns in university towns, for example. I had lunch in Essencia Bakery off of 3rd Street, mainly because it was the ONLY place listed on wififreespot.com that had free wi-fi access in the entire town. (I have a theory about free wi-fi and a town’s “hipness”… it seems like the younger, cooler towns all have plenty of wi-fi spots, whereas the older, more family-oriented towns like Klamath Falls, OR or Yakima, WA have few or none.)

There were people walking about downtown, though not nearly as many as, say, Bend, OR, despite having a larger population. There appeared to be no homeless people here.

One striking (and admittedly superficial) impression I got almost immediately getting into town after spending the last two weeks in the active-lifestyle towns of Bend and Hood River, Oregon, were how many obese people who were here! I felt completely out of place. Even the younger folks (and I didn’t see many of them) looked out of shape. I was surprised considering how much sunshine and recreational opportunities Yakima supposedly has.

That said, everyone I encountered here seemed to be friendly and pleasant. There is even a signficant Hispanic population here, and while looking for a good radio station I encountered a few Spanish ones.

While cruising down Main Street I noticed a large number of outfits selling manufactured homes—the type that look like glorified mobile homes. “Oh no, not another Kennewick,” I thought, thinking of the Washington town 85 miles east of Yakima that I passed through a couple of years ago on the way to Idaho.

Happily, unlike Kennewick, those single- and double-wides do not seem to be nearly as ubiquitous over the Yakima landscape. Closer to downtown are older, tiny homes, but as one gets farther away from downtown, the homes are newer, and larger. Yakima is quite sprawling, and I noticed a “60th Street” sign before getting out into more country areas.

In these country areas, among the rolling hills and agricultural lands are significantly larger homes some overlooking the city or farmland. L’creme d’ l’creme are estates with views of Mt. Adams to the southwest. The snow-covered peak of Mt. Adams is quite a stark contrast to the barren hillsides closer to Yakima.

With so many days of sunshine and a greenway by the Yakima River, it stands to figure that there are many recreational opportunities including white water rafting, hiking, and cycling. There are even bike lanes farther away from downtown. Not that I saw anyone using them—I only saw a couple of cyclists, one of them goofing around on a BMX bike and another riding the wrong way downtown with a cigarette in his hand. : )

White Pass, or about 65 miles away, is a place one can go downhill skiing in the winter. There are other areas one can do some nordic skiing.

Statistically (e.g., according to city-data.com) the crime index here is above the national average, about the same as Portland’s. However, few violent crimes are committed, and I felt very safe here. It is not a scary town.

Yakima Valley has also become a good wine-producing area. I did not embark on a wine-tasting tour to gauge the quality of the wines, but I hear that they are not bad.

Religion/faith seems to be a big thing here. There are a lot of churches (though mostly all of the Protestant variety—First Baptist, Presbyterian, Methodist, Episcopal—with a couple of Lutheran and Catholic churches. In the visitor’s guide, I counted 22 churches total. There is a notable lack of Unitarian churches and Buddhist or Jewish synagogues.

There were also plenty of signs advocating “Support our Troops” (like, what American actually WANTS them to die or have injuries inflicted upon them?), though I did get a smile at one local’s grand display of “Down with Bush: Impeachment in Progress” (one can dream…)

Yakima is not a bad place. With its sunny climate, uncongested city area, recreational activities, low cost of living, and a fair amount of events going on around the area, it could actually be a pleasant place to live. In fact it is probably a good place to raise a family (I have no idea how good the schools are, though.) For myself, however, the scenery is much too dry and the town feels too much like an older person’s or family-oriented type of town. Not bad, just not my cup of tea.

That visit was posted in 2005! ;you should come back and visit us again! you wouldnt recognize downtown Yakima with it wine tasting rooms, new sidewalks ,landscaping, new resturants. condos,Hotels downtown Yakima has come alive! ↩ Reply

Your post was posted in 2009! Come visit the page again! You wouldnt recognize it! Oh. Wait. Yes you would, it?s literally the exact same! ↩ Reply