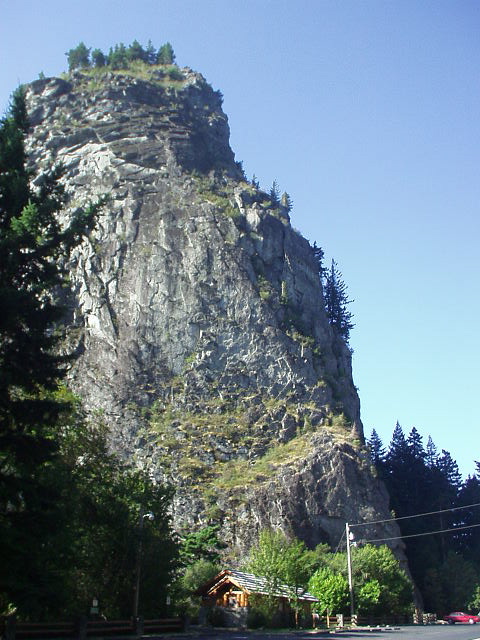 I went to Beacon Rock State Park to check out local rock about 25 miles west of Hood River, OR. Beacon Rock is located in the Columbia Gorge natural scenic area. It is actually in Washington State, right on the Oregon border. Beacon rock is a natural monolith that once formed the basaltic core of a volcano, which has been eroded away by the river. It is almost as large as Gibraltar. At the top is a commanding view of the surrounding gorge, the river, nearby waterfalls, and rugged cliffs.

Lewis and Clark first referred to this as “Beaten Rock,” but then inexplicably started calling it “Beacon Rock”, perhaps because the rock was like a “beacon in the gorge.” This was in the early 19th century. Later on in the 19th century, the rock was called “Castle Rock”, but its name was soon restored to Lewis & Clark’s earlier designation.

I camped out in the campgrounds a mile away from the rock in the state park; the campground was very nice! Here I talked with a fellow named Frank who was originally from Philadelphia. He had driven west to check out the Jackson Hole area as a possible place to retire to, but was shocked to see that property up there, including very modest homes, all cost over $600k! “And it would be much nicer to have $1.2 million for a home there,” he said. Somewhat disillusioned, he continued on west and ended up in the same place I did. He also seemed to really like Montana but said just not enough people live out there and everywhere but around Missoula is “flat prarie land”.

The next morning I hiked up Beacon Rock. The hike is about a mile long, traversing over approximately 50 switchbacks, and climbs about 800 feet. At the top I met a lady named Karen who was doing hill repeats as training for a hike up Mt. Adams. She lived in a town just east of Vancouver, WA, having moved there from Cupertino, CA in 1988. She was very friendly and seemed to love living in this area. “With scenery like this,” as we admired the panoramic view of the gorge and the valleys beyond on top of Beacon Rock, “how could you not?” She did mention that “Californians often have a hard time living here since it is gray and overcast all the time, at least from November until about July 4th.” (She did confirm, however, that it is a little sunnier in Hood River.) Yet, she finds dry, yellow/brown, barren land more depressing than rain and gray clouds… a sentiment I may share; am not sure yet.

My name is Prabhaker James and I climbed Beacon Rock to celebrate my 70th birthday in the year 2000. Its a wonderful experience to view the beautiful paranoma around the mountain and glorious Columbia River Gorge. I am from India. ↩ Reply