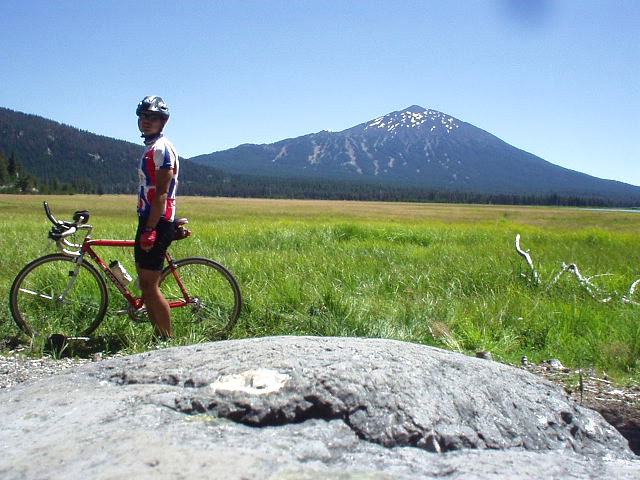 This self-supported ride is called (at least by me) the Mt. Bachelor 100 as it is a century route where you get to see Mt. Bachelor many times. Untroubled by traffic, there are panoramic views of the Cascades, with gradual (but long) climbs and pine everywhere. One also passes by Todd, Sparks, Devils, Elk, Hosmer, Lava, Little Lava, and Cultus Lakes. Needless to say, this ride can only be done when there is no snow on the highways, which probably is only the summertime and maybe late spring and early fall. This was some of the best traffic-free riding I have done anywhere.

Note: did extra 10 miles by passing up the turnoff to the Cascade Lakes Resort @ Cultus Lake by 5 miles before turning around. Hence did 107 miles.

Excerpts from an email sent out today about this ride:

The riding out here is the BEST! Great views of the Cascades, Mt. Bachelor and the Cascade lakes, and during those 7 hours or so only ~50 cars passed me. Lots of climbing too (I only did gradual climbs yesterday, but one was 10 miles long and another ~15 miles long), making for some potentially 50+ mph descents (I only got up to 47.5 mph, when I decided I better sit up and scrub off some speed, since I didn’t know the roads too well!)

Fortunately, there was food available at Cultus Lake, because it was Mile 60 when I got there (on the way back) and I was famished. With the climbing left after that, I could have been in trouble if I did not eat, especially since I unwittingly left some bananas on the passenger seat (forgot to stuff them in my jersey pockets) when I left. Otherwise, wonderful ride, with panoramic views and great temperatures. It was in the high 70s most of the time even though it was supposedly 92 degrees in Bend.

There were perhaps 2 dozen other cyclists I saw, all of whom I waved at. (About 1/3rd of them waved back, which seems a fairly typical percentage for road cyclists). I also saw about a dozen cross-country skaters skating their way up Highway 46 as I came on down. Getting ready for the upcoming cross-country ski season, I guess!