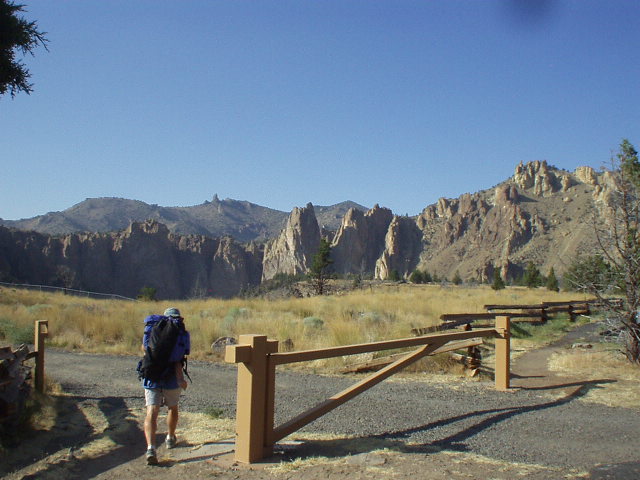 “Smith Rock,” said Hunza, a rock climbing enthusiast from the Czech Republic before moving here 8 years ago, “”was THE premiere place for rock climbing in the world.” Indeed, my California friends were all raving about the rock, sending me messages that said things like they hope I move to Bend so they will “have an excuse to go to Smith Rock!”

Hence, I was ecstatic when Hunza invited me to go climbing with his wife Margey and his co-worker Bethany one Tuesday night. Smith Rock was a mere 40 minute drive (through rush-hour traffic) from Hunza and Margey’s place in Bend, and the view of the entire place from the parking lot was awesome. So much volcanic rock, so many routes, so little time.

We went to do a few climbs near that called “the Phoenix”, which were shaded, not that it was an especially hot day. The mosquitoes were out in full force today, which surprised Margey, who said “the mosquitoes are never out in Central Oregon.” Fortunately I brought some citronella-oil bug spray which kept them at bay, unlike at Crater Lake, when I was devoured by them.

Anyhow, the rock was great, with a ton of texture, sometimes somewhat sharp, but not very painful nor nearly as crumbly as the volcanic rock at, say, Pinnacles in CA. We did four well-bolted climbs, including a 5.8, two 5.10a’s, and a 5.10b, until it got dark.