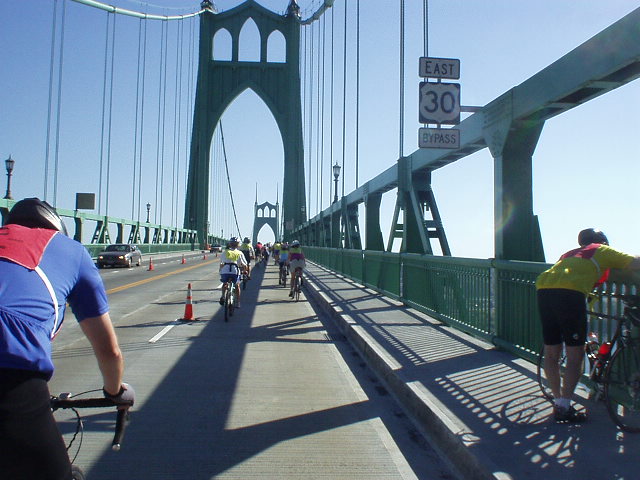 The 10th annual Providence Bridge Ride makes a good counterpart to Portland’s other signature event running that same weekend, Bite of Oregon. This is because both give something of a taste of Portland, if in only a fairly small way. During the Bite of Oregon, one could try out some of the local delicacies here (like scampi), but just as worth going to see was Little Richard, the self-proclaimed “inventor of rock ‘n’ roll” (my friends and I were unconvinced but we certainly enjoyed his show). Similarly, during the Bridge Ride one could ride over up to 10 of Portland’s main bridges and get some great views of the city, but just as worth going for was hanging out with friends and checking out all of the different bicycles.

Despite being very sore from the Torture 10,000 yesterday and staying out to almost 2:00 a.m. the night before, I managed to wake up at 5:00 a.m. to drive downtown and meet up with Mike at 6:15 a.m. Some of his friends from their new triathlon club also rode, but we did not ride with them much. Actually, at times it seemed like we were walking or scooting along (with our feet) half of the time, since there were 18,000 people! Still, this was a great way to go through different areas of Portland and get some unparalleled views of the city. Two bridges (the Fremont and Marquam bridges, I think) are normally for cars only, so it was only on this morning that one would actually be able to get to ride over on a bicycle.

The total ride length was about 34 miles. Food and drink was provided on the way, mainly Clif Bar bits, bananas, apples, and water.