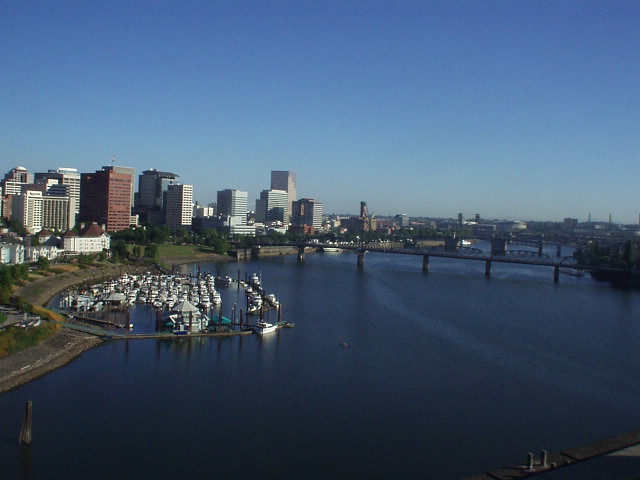 This is my 4th time in Portland, Oregon, almost spending an entire week here. Everytime I come (at least in summer), I am reminded how much I like this city. Alas, it is imperfect and I am not a large city type of guy, but of the larger metropolitan areas (>500,00 people), this has to rank among my favorites.

At last, here is the full report.

The Willamette River, with runs roughly north-south, divides Portland into west and east parts. Burnside Ave., including the Burnside Bridge which goes over the Willamette, divides the city into north and south parts. The Willamette River and Burnside Ave., therefore, divide Portland into 4 quadrants, which are referred to as “Northwest”, “Northeast”, “Southwest”, and “Southeast” Portland. Look at any road sign, and the name of the street will usually be preceded by NW, or SE, etc., such as “SE Capitol Highway”.

The northern boundary of Portland (and of Oregon, for that matter) is the Columbia River. On the other side is Vancouver, Washington, which is something of a suburb of Portland.

The city of Portland is mostly flat or gently rolling, but is particularly hilly near the western boundary and areas directly south of the Columbia River.

Portland rivals Pittsburgh, PA in sheer number of bridges. Each year there is even the Bridge Ride where one can ride as many as 10 of the bridges with no car traffic.

Downtown Portland—which is in the southwestern quadrant, has a wonderful waterfront (by the Willamette) where some sort of event/festival is taking place each weekend. For example, when I was out there in July, there was the Waterfront Blues Festival; this time there was the Bite of Oregon. The Bridge Ride also started from here. “There are just too many things to do here!” I excitedly wrote a friend.

There seemed to be a pretty good mix of shops, restaurants, and clubs. On Saturday, some friends and I went to H20, a club that was becoming “the” club in Portland, but when we were there (from 10:00 p.m. to midnight or so), there were not nearly as many people as, say, in a San Franciscan or even Palo Alto club. (I think clubs are the one place where I think lots of people is good.)

There are also some nice restaurants in Northeast Portland. On Sunday, my friend Mike and his two friends Mike and Mike (yes, there were 3 Mikes at our table, and one Felix) went out to a nice restaurant with good wine called Ciao Vito. The waitress was totally friendly and knowledgeable and really took the time to help Mike #3 (a true wine connoisseur) select a good wine for us. Patience and time seem to be something Portlanders have more of than Bay Area types.

Parking in downtown can be somewhat problematic. While it is easier to find parking than, say, San Francisco, one often has to circle the block several times or park in a parking garage. That said, I had always been able to find parking somewhere within walking distance of wherever I was going within 10 minutes. Parking along downtown streets cost $1.25/hr (payable by credit cards at one of the “Pay to Park” machines).

While not growing at the rate of, say, Bend, lots of people are still moving to Portland, especially from California. I met a lot of CA transplants here. Some of the “locals” (at least, those looking to buy a home here sometime in the future) seem to harbor a little bit of resentment at Californians “running up real estate prices” (more on this below). I also heard comments on the local talk radio stations such as, “The weather is really nice right now! Hopefully, this will not entice more Californians to move up here though, as we already have too many people!”

The latter may be true, as underscored by traffic conditions. Particularly during evening rush-hour, traffic is horrendous and on certain freeways (I-5 and I-84 come to mind) just as bad as the Bay Area. A 18-mile journey from Southeast Portland to Vancouver, WA starting at 5:55 p.m. took me one-hour, and there were no accidents. If you work in Portland and value your time, do not live in Vancouver.

Roads aside from downtown are not always straight, plus the city of Portland is geographically large. I got lost A LOT, which I attribute partly to the layout and largeness of the city, and partly due to my own lack of brainpower.

One of the reasons so many Californians (particularly Bay Area types) move and feel comfortable here is the very liberal bent the city has. Oregon is a blue state, after all, only because of the Portland metropolitan area which has over half of the state’s population. (The rest of Oregon is very conservative.) When I was here in July I was seeing lots of people wearing T-shirts such as “Fuck War” or “Axis of Evil: U.S., U.K., Israel”.

Cycling here is great! (At least when it is not raining.) While downtown doesn’t have quite the infrastructure (e.g., dedicated bike lanes) and hence some high-profile accidents sometimes occur, there are plenty of bike commuters in the summer. Critical Mass (which Mike tells me the mayor even rode in)—where thousands of bicyclists take over the streets to promote cycling as a viable means of transport—occurs each month.

There are great roads for cycling around here, as evidenced by the Torture 10,000 century which I rode in a couple of weeks ago.

Bicycling magazine even proclaimed Portland as the “most bicycle-friendly city” in the U.S. some years ago.

Beacon Rock is ~35 miles east and Smith Rock is maybe 135 miles southeast. I’m sure there are other places.

There are at least 2 indoor rock climbing gyms here.

On Wednesday, Mike invited me to do an open water swim workout with his buddies from the newly formed Portland Triathlon Club (currently 45 members strong at its inception). The workout was actually in Vancouver, WA, ~17 miles away from downtown Portland, but took over an hour to drive to since traffic to Vancouver during rush hour is so bad! The lake (or “pond” as Mike called it) is called the Salmon Creek Lake, with warm, clean water. We did two laps in it, with myself swimming without a wetsuit. The circumference is about 0.3-0.4 mile long, I was told.

Unfortunately, I did not check out if there were any other (closer) lakes to swim in.

Housing costs are a frequent complaint of Portlanders. They are some of the highest in Oregon. A 2,000 sq. ft. home goes for about $325k. To someone from California this might seem pretty reasonable, which is one reason some people here harbor some resentment to Californians “raising the housing prices here”. Presumably, these people are mostly renters looking to buy a place (one would think homeowners would love the values of their homes being raised!), but understandably, there are many people concerned about other issues associated with the influx of out-of-staters, like overcrowding.

In 2003, Oregon recorded the highest unemployment rate of any state in the nation. Therefore, high-for-Oregon real estate costs is a serious issue in Portland. Indeed, as a result of cost of living and the state of the economy in Oregon, this year Forbes ranked Portland as the 3rd most overpriced place in the United States.

The crime rate here is above the national average and is particularly high for property-related crimes. Anecdotally, a friend of mine there had his home broken into and quite a few things stolen just a year after buying the place, which is located in a pretty nice area of Portland.

Happily, violent crimes do not occur too frequently here for a city of over half a million people. For example, there were 20 homicides in Portland in 2002, whereas Oakland, California (which has less people) had 108!

In truth, I felt safe in Portland, including walking around in the middle of the night.

During all of my time here, I got the sense that the people up here are exceptionally friendly. Others I have talked to got that sense as well. Furthermore, several people (well, guys) who came to visit Portland have told me “there are A LOT of good-looking women here!” I can only concur; for some reason, there seem to be a disproportionate amount of good-looking people here, as well as other places in Oregon (Bend and Hood River come to mind…)

If one equates “fit” as “good-looking” there is also good news for the entire state of Oregon, as Oregon recently has had the distinction as being the only state in the union where people have not gotten fatter!

Most of the residents I talked to seemed generally pleased with living in Portland, and even have gotten used to the rain (I suppose those who hadn’t had moved…)

Some Portlanders will even tell you that Portland gets less precipitation than, say, Houston. While this may be technically true, Portland has earned the distinction of being rainy all the time because it does seem to drizzle (as opposed to downpour) all the time in the winter. In addition, according to one resident, skies remain gray almost all the time from November to the 4th of July! That is a mighty long time. The summers are beautiful and even get up into the 90s with lots of sun, but as the resident pointed out, “the window of great weather is pretty small…”

Portland remains one of my favorite U.S. metropolitan areas, with friendly folks, an attractive environment, a progressive air, and lots of culture. For many of those contemplating moving to Portland, the dreary skies may be the biggest issue. Other issues may include traffic, parking, and housing.