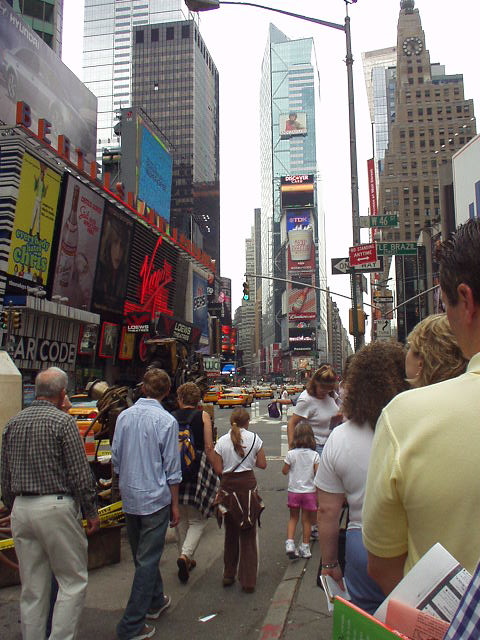 I made a brief detour from the Great American Western Road Trip to fly out and visit Carolyn for the weekend and see New Jersey and New York City for the first time as an adult who can actually remember stuff about places (I couldn’t as a kid, which is when I was last in NYC). Here is a recap of the trip and some brief impressions:

“The City that Never Sleeps” has been cast in many different lights in the media, perhaps the most glamourously in the now defunct HBO series Sex and the City. But from what I saw during my visit, it was hard to imagine life in New York being anything even close to that portrayed by Carrie, Charlotte, Miranda and Samantha.

The reality is that New York City in August is stifling hot and humid. Year-round, it is overrun by taxis, busses, and millions of people. Don’t even try to drive here! If you do, prepare to be flustered by standstill traffic and the constant blaring of horns by impatient drivers.

Impatience. That seems to be another distinguishing characteristic of The Big Apple. Everyone here walks super fast! (Including Carolyn, who would make quite a race-walker.) Perhaps this is because everyone is racing to not miss the subway, train, or bus. At least we seemed to be doing this quite a bit. Or maybe people are running away from all of panhandlers lining the rubbish-filled streets. Or to find a place with air conditioning.

I am only being half-facetious here…

In any case, what else is to be expected of America’s largest megalopolis? I suppose there are some redeeming qualities. Actually, we had a wonderful time, be it walking through Times Square, SOHO (south of Houston), Little Italy, or Chinatown. We saw a show on Broadway (“rent”), and had some delicious Ethiopian food in a less touristy part of town. At my insistence, Carolyn even took me up Trump Tower, where The Apprentice was filmed.

Perhaps the most memorable part of the weekend was going down to Sandy Hook to play on the beach. It was really hot on Sunday (mid 90s with high humidity), so we’d lay in the sand, play in the water, jump over or through crashing waves… and repeat. That’s all we did for most of the afternoon, and it was very nice. Never mind that this turned out to be a nudist beach (we kept our swimsuits on). Also never mind that New York commercialism knows no boundaries and planes were constantly flying overhead with banners like the dust tails in a comet’s wake. Or a pterodactyl towing a billboard advertising everything from new homes to beer.

Speaking of new homes, real estate here makes even the San Francisco Bay Area look like a bargain! With two-bedroom condos selling for one million smackers on top of building-imposed “maintenance fees” of $400-$1000 per month, one has to wonder why people even bother with this area. Then again, my cluelessness as to why the area is so attractive to so many people is apparent in the following remark I made to a friend upon returning to Portland:

Portland is WAY better than New York City, in like every single way! It is cleaner, cooler, less congested, friendlier, much less expensive, etc. There are much more good-looking people here too—never mind that New York has 15X the amount of people of Portland. Life is just so much saner, so much more real, than in the Big Apple.

Indeed, I remain not-a-big-city kind of guy. Nevertheless, NYC has to be experienced at least once, and it did make for a nice visit, one that I would (and will) do again in the future.

Hi Felix, well it always amazes me how you find time to pack-in any new adventure you can! Hope you had a nice "vacation" from the GAWRT for a couple of days. BTW, I found your spreadsheet comparing the cities interesting, and very "Felix"! Brian ↩ Reply

Next time you go, cross the river into Williamsburg Brooklyn. In comparison to Manhattan, it's very laid-back + creative, with a slower and more charming way of life. Lived there 6 years. They're supposedly building a greenway for cyclists there along the East River. But don't go in August! That is THE worst month of the year for nyc, and anyone who can get out of town does. Excellent website - am reading thru your travelogues for more info on Colorado and Pacific NW, as we're going out there soon to look around for a place to move to. You're helping to cross a few off our list (eg - spokane's obesity- egads) and add a few too. allrighty - back to reading - just curious what you'll say about arizona and new mexico... that pocatello write-up was priceless with that frightening op-ed!...So thanks for taking the time to write these up and post them online, these travelogues really help out people like me who try to do most of the town-scout research online before the trips. ↩ Reply

Safe and convenient, NYC provides an abundance of choices for all lifestyles. Most of all, it is a place where not one person is better than another. The parks are wonderful. You can kayak, sail, fly, drive, hike, bike or do whatever you like here. As someone who is not into sports, I'll give you my favorite past-time: Ride from Long Island City in Queens over the Queensboro Bridge, on to Central Park, through the park, south on 7th Avenue, through Times Square, down to the Brooklyn Bridge, over to Brooklyn, and back to Long Island City on late Sunday night for some 3 hours of visual magic. I do this 3-4 times a year on my Redline Monocog/Brooks/Panaracer Tserv. I also ride over the Triborough to the Bronx through the beautiful green parks and take the subway to Manhattan (you are allowed to take your bike on subway outside rush-hour) to finish the ride by using the west-side bike lane to the South Ferry, and up 3rd avenue and back over the Queensboro Bridge on early Sunday mornings. I use some variations of these rides, yet biking and walking are the best ways to discover the city. Since I drove a yellow cab while doing my undergrad studies and recently a 40 foot bus, I am quite adept at interacting with traffic. My skills fall short of our messengers' yet I can survive and enjoy at same time. After living in the city with its excellent public transportation, cuisine and entertainment (Opera, B'way, Museums, Parks especially during hot summer or dreary winter days) very few other cities measure up to the Big Apple. I also ride a motorcycle and drive a mini p'up which I plan to complement with a Miata this year for my favorite rides around CT, NY, MA. Awesome alternative to NYC is Kananaskis Park in the Canadian Rockies, the Sundance Lodge (Teepee or tent) as jump base and Canmore for breakfast/internet. Awesome driving up to Lake Louise for a Canoe ride. Canmore is on my short list of places to live for every view is a postcard. Cheers. ↩ Reply