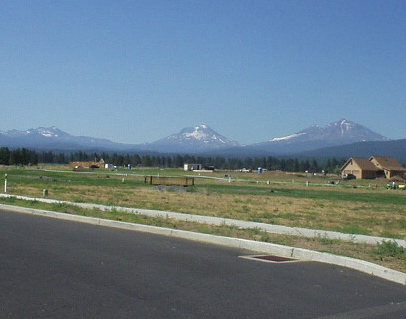 As a last stop in the Bend, Oregon area, I stopped by the small town of Sisters. Sisters is 22 miles northwest of Bend, with a population of 1,462 (2005). Now, the tiny number people there alone would make me rule out living there full-time, but it is a cute lil’ town worthy of some impressions.

Sisters is named after the three peaks towering over the area in the distance called the Three Sisters. At various times locals (or rather, perhaps the Chamber of Commerce) have dubbed the town “The Jewel of Central Oregon” or, more recently, “The Gateway to the Cascades”. Roads leading to and from downtown are lined with lush, Ponderosa pine, and the edge of town is graced by the Deschutes National Forest, which is laced with miles of hiking trails, rivers for fishing, and scenic vistas and drives.

Other recreational activities Sisters is good for is mountain climbing, camping, mountain biking, golfing, rafting, skiing and snowmobiling. On the day I visited, I chose to go road biking, going up 13 miles from the center of town to the top of McKenzie Pass along the Oregon Scenic Byway (I forget the highway number), which was a gradual climb with temperatures in the low 80s midday in early August. As in the Mt. Bachelor 100, one was as likely to see another cyclist as a car (and there were not too many of each). In contrast to the Cascade Lakes area, the Deschutes National Forest is even more densely populated with trees and the roads are slightly more narrow. In any case, it made for great riding!

A visit to downtown is like being on the set of an old Western movie. Tourism is the primary industry here and the clean downtown is comprised of several antique shops, art galleries, and saloons such as Bronco Billy’s. Compared to Bend, real estate is a bargain too, with new property with a great view of the Three Sisters (see photo above) with 1650-2900 sq. ft. going for $360-460k (August 2005). I imagine in another 20 years, it will be another Bend, making it a good investment opportunity. As it is right now, it is a great little town; now only if it had more people…