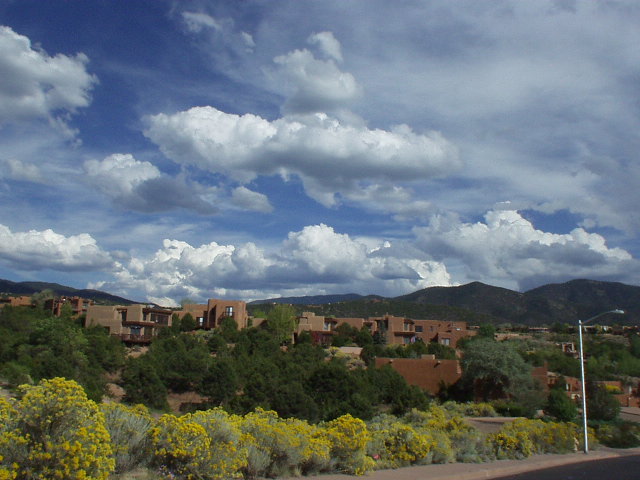 Santa Fe is one of the most interesting towns I have ever visited in the United States. First off, unlike most of New Mexico, it is very green being up in the mountains and hence has weather more similar to Bend, Oregon, than, say, Phoenix. Secondly, architecture is more akin to the Incas than to your standard order stick-and-mortar tract home. To live in Santa Fe, you really have to be a fan of adobe!

Another (for me, nice) surprise was how liberal Santa Fe is in the otherwise red state of New Mexico. According to a friend, “leave a dog in a car, and there will be people ready to kill you.” Other hints of liberalism include shops like Santa Fe Hemp displaying signs such as “War is NOT the answer!” While reading the Sun News over a delicious burrito, I came across articles commending how a federal judge ordered the EPA to implement stronger safety guidelines for rat poisons and
about how the New Mexico legislature is considering a bill to forbid the sale of aspartame-containing products. Wow! No Diet Coke for people if this bill passes. The purpose of this bill to eliminate “the highly neurotoxic aspartame from the food supply” in New Mexico. While I am aware that aspartame poses a number of dangers, I am not sure that imposition of Big Brother rules on what you can or cannot ingest is necessarily the answer; how ’bout warning labels like those on packages of cigarettes or saccharin-containing gum?

Other things that surprised me about Santa Fe was how this town of 63,000 residents has more people ages 40-55 than any other age group according to city-data.com. In fact, the average age of people living here is 40 years old. Also somewhat of a surprise is how expensive it is to own a home in this city. Then again, according to Bert Sperling in 2005, Santa Fe is the second best place to live in the U.S.. So maybe its residents think the high cost of living is justified by the high quality of life here.