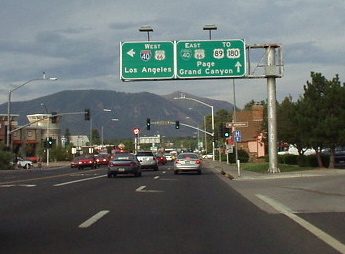 Flagstaff was one of my only hopes in Arizona for a new home, as it is one of the only major cities in that state where the summers are not consistently in the triple-digits from May to September. In contrast, Flagstaff gets about 100′ of snow each year! (It melts quickly under the Arizona sun, I hear). However, as I arrived in town I was fairly unimpressed. Here’s why:

All that said, the Coconino National Forest just south of Flagstaff was gorgeous and made for an awesome sports car drive down US 89A, and is pretty ideally located just 90 miles south of the Grand Canyon, 30 miles north of Sedona, and 90 miles north of Phoenix. I could imagine living here, unlike sprawling super-hot Phoenix!

Flee! Flee While you still can!! You would not want to live here. It is way overpriced, the traffic is insane and they are making micro management laws about everything. It will be illegal as of Tuesday to sleep in your car or anywhere else not a home or hotel as an attempt to deal with a rampant street drunk problem. Property crime is outrageous and I am suprised you didnt get hit up by the numerous transients for money. The college is second rate at best and way overpriced. Yes, the forest is beautiful, unless it is overcrowded and you step in poo left by a drunk. ↩ Reply

Flagstaff is awesome. Believe me, you may not like it till you leave it and then you'll miss it! People in Flagstaff are nice and laid back compared to most people. Flagstaff has a historic value to it that hasn't been thrown away unlike most towns. Flagstaff has a great location just north of beautiful Sedona and just south of the one and only Grand Canyon! Where else in the world can you live with hours of both the Painted Desert and the Grand Canyon, two of seven world wonders??? I love Flagstaff, sure it has it's problems, what city dosn't? But the location, and beauty are unmachable! I lived in FLagstaff for most of my life and it wasn't until I had to move to New Jersey that I realized how blessed I was to live in Flagstaff. ↩ Reply

You are so right. I went to NAU and moved to New York to get my Masters degree.

Flagstaff, oh Flagstaff.....I miss it so much. It is so great there...beautiful place, beautiful people. ↩ Reply