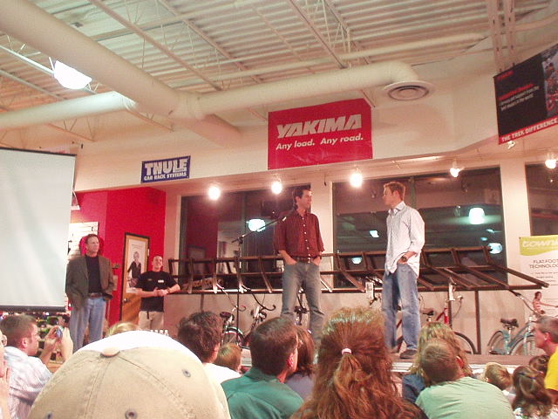 Have you ever heard of Tom Danielson? Admittedly, I had not, but maybe I should have as he was the Team Discovery cyclist who won the Tour de Georgia this year and just came in 8th in La Vuelta a España. Plus, he is one of Colorado’s pro-cycling homebodies, being a resident of Durango with some Fort Collins connections. It came as no surprise, then, that 300 or so cycling enthusiasts poured into Lee’s Cyclery in Fort Collins to get a glimpse of the boy wonder who, word has it, just might be the next Lance Armstrong—his (now former) teammate and idol. To top off the event, Mike Sagan, the lead product designer and engineer of Trek Bicycles’ Advanced Concept Group, presented Armstrong’s 2005 winning time trial bike.

Despite his accomplishments, the 5’10” 129-lb Danielson had a down-to-earth personality and displayed refreshing humility as Dan Osipow, Director of Communications for Team Discovery, interviewed him in front of the huge crowd of adoring cyclists. Unscripted and unrehearsed, he nonetheless captivated the audience with his stories about riding with Lance, his experience as a pro in Europe, all while injecting anecdotes of good humor. One particular light moment was when he rehashed how a deranged fan started doing Tae Kwan Do in front of a charging peloton. As the peloton split into two columns, he figured a crash must have occurred only to encounter this dude doing martial arts right in the middle of the road. “By the way,” he said in his typical understated manner, “these people are NOT welcome…”

After Tom spoke, Mike Sagan commenced his PowerPoint presentation of his 8 years at Trek. His presentation was particularly interesting to me as mechanical design is what I had been and will be doing as my line of work.

What is interesting about Sagan’s story is that he did not even ride a bicycle before he was approached by Trek. Instead, he had experience designing cardboard food containers and creating animated, digitized Pixar-esque films. However, his 3D-CAD, design, and optimization skills would be instrumental in the conception of some of Trek’s most advanced bicycles, and by virtue of being employed by this bicycle behemoth, he’d soon turn into a hard-core bicycle junkie who now rides over 100 miles a week (a lot more than I have been riding!)

Much of the presentation was promoting Trek’s OCLV (optimum compaction, low-void) carbon fiber bicycles, though several tidbits of trivia were thrown in. For example:

Hey Felix -- Great write-up as usual. You should consider being an author. One minor correction though, having just gone through the purchase process with Trek. The Madone SL uses OCLV 110. The regular Madone uses OCLV 120. They save the OCLV 55 for the Madone SSL, which costs something like $7500. ↩Reply

You mentioned Lance's TT bikes, but let's not forget Lance's actual TT Trek in 2001 - the one with the water bladder INSIDE the frame. Talk about squirely.