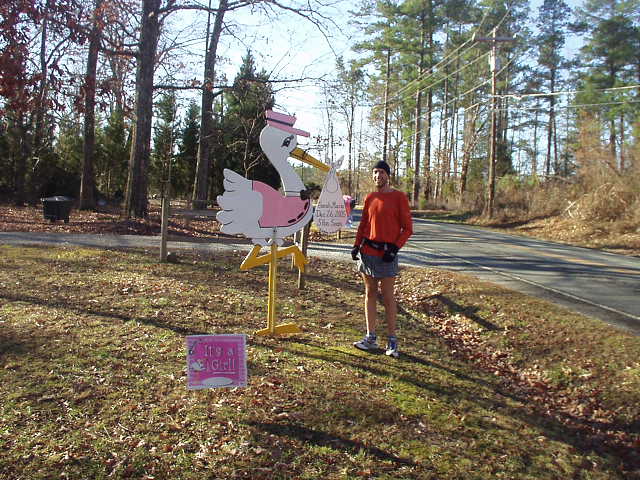 “Remember,” I said over the phone to my buddy Dan before arriving at his neck of the woods in Durham, North Carolina, “we have to exercise during this weekend.”

My recent travels, after all, had not been too conducive to training—particularly for the Mardi Gras Marathon that was coming up. To begin with, there was limited time already to spend with friends and family in California. The rain and food coma-inducing holiday treats did not help matters either. Ah, excuses excuses.

Also, prior to my upcoming trip to New Jersey and New York, Carolyn had warned me that we were going to be taking life nice and easy, so I had better get in my exercise before I arrived!

Dan took my request to heart. Let me list what he made us do:

In a 48 hour period (Friday morning to Sunday morning), we had run 44 miles!

Actually, we sort of wimped out on the last day. 20 miles was the original plan. But then Dan woke up on Sunday insisting, “So we are running TWO miles this morning, right?” My continued responses of, “No Dan, twenty!” were subsequently dismissed and ignored.

This lead to one of the more light-hearted moments of the day when, at the beginning of the run, Dan requested that I tell him a joke.

“Ok. So why did Dan and Felix cross the road?” I asked.

It didn’t take long for Dan to think about that one. After he answered, “to run twenty miles,” I instantly replied, “Yes Dan! You are catching on now,” both of us laughing out loud.

In addition to running in what was spectacular winter weather for North Carolina (60s and sun, with relatively low humidity), we had good food and met up with cool friends of Dan.

The first person was Elizabeth, a Canadian from Ontario. A rheumatologist, she was both cute and smart. Over dinner we bombarded her with medical questions, including “so what do you think about the theory that one has a fixed number of heartbeats, and by over-exercising, one is wasting them?” and “what do you think about the food combining diet where one is not supposed to eat starches at the same time as meat?” And other odd questions that people like Dan and I think of.

Afterwards we played a board game whose name eludes me, but required putting down cards that best represented a chosen word. Elizabeth, unsurprisingly, was the winner, as Dan and I have an unusual talent for losing these types of games.

The next evening—New Year’s Eve—we went over to the home of Sam and Christina. First we played a rather bizarre TV-interfaced miniature golf game made “for kids age five years and older.” Gauging by the midget-lengthed size of the plastic golf club, I don’t think the inventor of this game conceived full-grown adults to be playing it. The game soon degenerated into a contest of who could lose the worst. Or maybe that’s how Sam (who would have easily won that contest) interpreted it. : ) After consuming some good food we went out into the yard—where it was cold and dark—to play with some more toys.

Apparently, Sam had re-“discovered” a bag of contraband he had accumulated in his youth, including sparklers and smoke bombs. Out came the matches. To our credit, none of the neighbors’ homes burned down and none of our clothes caught on fire. You can say we counted down the New Year with a bang.