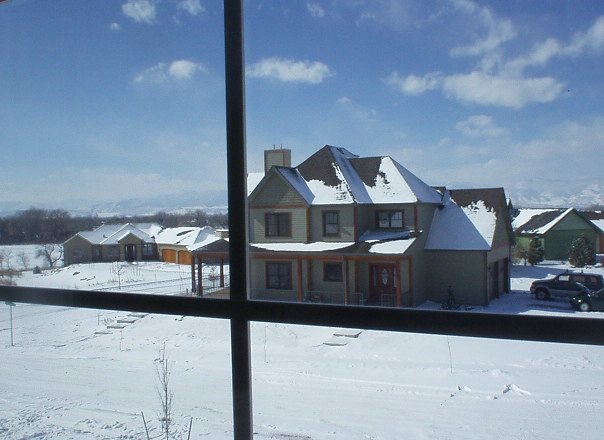 Fort Collins’ first big snowstorm of the year is already over and we are back to our usual sunny skies, but below are excerpts from an email I sent out regarding what can happen when one is not entirely prepared for a storm…

So we’ve been getting quite a bit of snow the last couple of days, finally, and it is a whopping zero degrees right now. However, stupid me, despite knowing the storm was coming, the last time I got groceries was a whole week ago!

At first I felt like I could hold out on getting groceries until the storm has finally passed through (this should be Sunday or Monday or so), but apparently I have been going food at a much faster rate than I thought. Today I noticed I was down to three apples, half a head of lettuce, and about one serving’s worth of angel hair pasta. (That is literally it, unless you include olive oil, vinegar, and hot sauce.)

Now, while I briefly considered rationing and becoming a fruitarian, I did some math. If each apple has 100 calories, the lettuce 20, and the pasta 150, then I had exactly 470 calories worth of food for the next two or three days.

I decided that was not going to cut it so I considered my options. They included (1) shoveling out the driveway so I could drive the car out of the garage okay (actually, be able to drive back up it when I came back) and then subject my poor car to a bit of snow, (2) have groceries delivered and pay the premium for that, (3) have, say, an extra-large pizza delivered and munch on that for 2 days, or (4) run/walk over to the grocery store and fetch some food.

I looked on Google Maps to see how far Albertsons was (one of the closer grocery stores), and it said 2.1 miles. I needed to get in a run anyhow, so I resolved, “ok, I’ll just run over there… 20 minutes.”

So I started running and 20 minutes passed. Then 30 minutes. Then 35. By that point I muttered to myself, “this is not 2.1 miles!” (Indeed, when I did a gmap-pedometer.com mapping, it turned out to be 3.7 miles. It turns out it would be 2.1 miles if I was a bird.) Also keep in mind that I was running through snow (which made me slower) and, as I mentioned, it was zero degrees Fahrenheit outside.

I finally got there, and came out with virtually nothing that contained water (except for a yellow onion) to minimize the weight I’d have to carry. Still, let me tell you, running 3.7 miles through snow carrying a full grocery bag is not exactly easy.

Forty minutes after that, I was finally back in my neighborhood and was really hoping that none of my neighbors would be out to see me carrying a bag of groceries in zero degree weather. As my luck would have it, however, my neighbor Dick was outside shoveling off the sidewalk. I greeted him by saying, “oh hey Dick” trying to sound as blasé as possible.

He responded, “Hi Felix,” before turning and saying, “hey, did you just go to the market?” When I replied, “yeah, Albertsons” and he exclaimed, “you walked all the way over there in this weather?” I then said, “well, actually, I ran,” but I could tell that he just thought I was nuts, especially when he uttered an “aw, man!”

As it turned out, the weather the next day was much improved, and it was very possible for me to drive my car with little inconvenience. (Indeed, I did drive down to Old Town.) Maybe I should have become a fruitarian for that one day after all.

Ahhh, great! It reminds me of my Colorado days [in Estes Park]...snowing even in May or September...the brilliant blue sky...There's something therapeutic about taking matters into ones own hands and getting it done. :)