Years ago, while planning my current life, I wrote down some of the characteristics that constituted my dream home. 10 minutes away from a lively downtown with lots of character? Check. A view of a lake and the mountains? Check. A nice neighborhood in the country with walking trails? Check. A baby grand piano? Yes.

It turned out the last item would take me the longest to achieve out of all of them, mainly due to sporadic searching, a limited budget for the purpose, and a general dearth of used baby grands in the area. The wait was well worth it, though. A 1924 Chicago Cable Co. piano now graces the living room.

The piano belonged to a young couple, Heather and Ryan, out in Fort Collins. The piano had been in Heather’s family for 30 years, purchased from her music teacher in Fulton, Missouri. Prior to that the piano was at Westminster College for at least 2 years. That accounts for the last 32 years. Amazingly, this particular piano has been in existence for 50 more years before that. This makes my 1969 MGB—previously the oldest object I’ve ever had—seem young. Dick Cheney, too. Wait, that is impossible…

Anyhow, from what I could gleam off of the internet, the Cable Piano Company of Chicago (as they were sometimes called) was founded by Herman D. Cable in 1881, and claimed to be “the world’s greatest manufacturer of pianos, inner player pianos, and organs.” It was also known for progressive business practices:

Cable Piano Company became known not only for its products, but also for its working conditions. During the factory’s heyday in the early 1900s, there were as many as 500 employees, many of whom were women. Employees could enjoy the company-sponsored brass band and male chorus, or play on the company baseball team. With its own electric plant and fire protection, the factory was also self-sufficient.

Unfortunately, the Great Depression took its toll, and the company was essentially out of business by the mid-to-late 1930s.

This particular piano is still in surprisingly good shape, stained in a grainy, dark brown finish common to a lot of antiques. Some of the keys are chipped and discoloured, but all of them work. Despite not being tuned in 4 years, the piano sounds wonderful, at least as good as the upright pianos I was accustomed to when growing up, effusing a rich, not-too-bright tone that easily fills up the entire house with music. Er, make that “noise” considering my current state of piano playing, not having practiced since high school!

It won’t ever be confused with a Steinway, but then again, this particular piano cost me just 1% (no kidding) of what one of the more modest, brand new Steinways retail for. Not to mention I will never be confused with Mozart, which may actually be a good thing considering that he turns 250 this year. 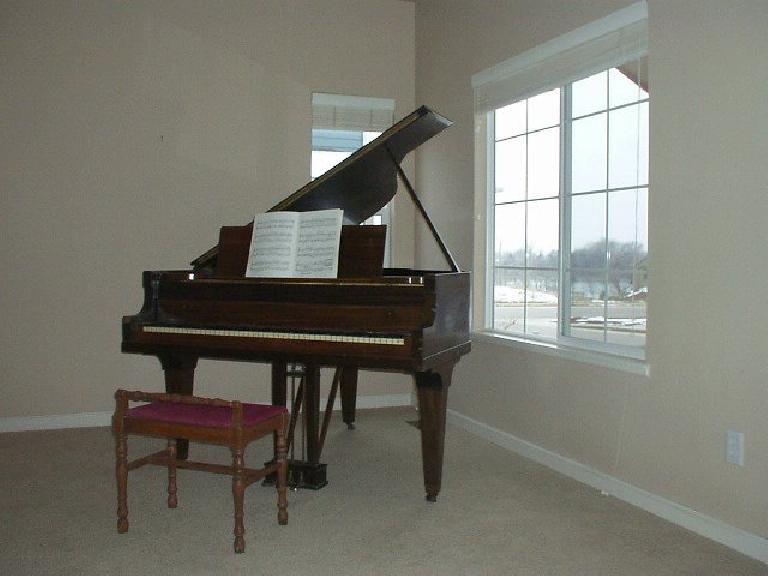