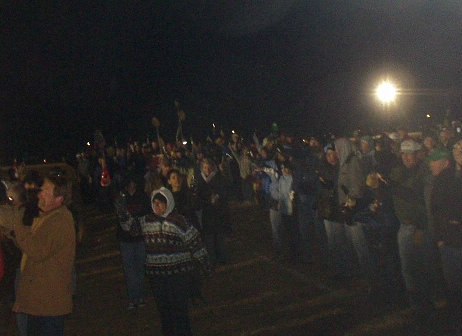 Every now and then (well, maybe once every 5 years) I try to think of a way to set a world record in something… anything. Longest time to endure full body ice contact? 1 hour, 17 minutes. Most 1-finger pushups? 124. Longest documented lifetime walking mileage? 34,501 miles. All of those records seem just too difficult, or painful, to beat.

Therefore I was excited to read that Larimer County (the county the city of Fort Collins, CO is in) was going to make a world record attempt for the number of people participating in a groundbreaking, and that I could help by merely showing up. Hey, if you can’t beat them, join them!

The story goes, a new 4-H Youth and Community Center was going to be built at the Larimer County Fairgrounds—also known as “The Ranch”—and the community was invited out to the groundbreaking. (Click here for a newspaper article.) Then, someone came up with the bright idea that if enough people came out with shovels, we could break the record of 2,453 people, which was set in Newberg, Oregon on September 27, 2003.

Seemed like a fairly simple task. First, the issue of having enough digging tools to go around was taken care of by the county, which gave away commemorative “shovels” (actually, little garden trowels worth about $1.75) to everyone who showed up. Then it was just a matter of getting enough people to come. As the event was held right next to the Budweiser Event Center—where a hockey game was going to be played that night—chances of this happening seemed pretty good. After all, there would be thousands of people coming just to watch the game!

A potential discouragement was the weather. Though a recent minor snowstorm had stopped hours earlier and the roads were clear, the air was cold—under 30 degrees, plus wind. The event was held entirely outdoors. Even the tent in which pre-groundbreaking speeches were made was entirely open. The upside to all of this was 1) free hot chocolate (and cookies) was available to help keep people warm, and 2) speeches were kept pretty short so as to minimize the amount of time people had to stand out there and freeze their butts off!

After the speeches and night had fallen, all of us gathered in an open area where white lines were drawn. After a countdown (10… 9… 8…), we plunged our “shovels” into the ground. Then, some seconds later, we took out the spades out of the ground and held them up high for photos. And that, apparently, is all that a “groundbreaking” is. I don’t think anyone (but some kids) did as much as unearth 2 handfuls of dirt from the ground, but I suppose plunging the trowels into the ground is indeed “breaking” it…

As it turned out, once the tallies were in, we failed miserably in the world-record attempt as only 1,374 people showed up. Oh well. At least the 4-H Youths will (eventually) have a new meeting place, the county will have a new community center, and now I know where the upcoming summer fair will be held.

Back to the drawing board about setting a world record, though. Excuse me as I go see if I can do any 1-finger pushups.