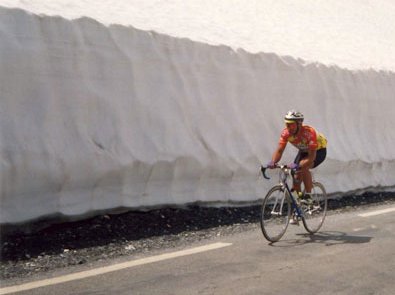 After weeks of gorgeous, sunny, 50- and 60-degree weather (see Lisa’s Visit) in Fort Collins, we finally got another snowstorm! This one was minor, leaving fluffy white powder in the mountains and our lawns but hardly sticking to the roads and pavement. However, it did bring about colder temperatures that made bundling up to go outside mandatory.

“At least it is dry,” I thought as I commenced a self-supported 100-mile bicycle ride from Fort Collins to Boulder and back on Saturday. A couple of days prior the morning temperatures were the same (28 degrees), but the clouds gave way to a welcome sun in the afternoon. As the weather forecast called for a high of 41 degrees on Saturday I was optimistic the same thing would happen.

To make a long story short, it didn’t—it remained approximately 28 degrees the whole way. Let me explain what happened:

Amazingly, despite the frigid temperatures, I saw at least three dozen other cyclists out there on the road. My friend Diana—who was training with her cycling team in Boulder—was riding too and says she even saw me! Hardy cyclists, these Coloradoans…

In any case, I suppose it could have been worse—e.g., in Northern California, it was both cold and raining, causing my friends in the Tri-City Tri Club to cancel their Saturday ride again. Indeed, by far the coldest rides I’ve ever done was 1) the 1999 Davis 200km Brevet, and 2) a ride with my friend Dave down Sierra Road in San Jose. Both of those times it was pouring. I’d much rather be cycling in 28-degree-but-dry conditions than, say, 40-degree-but-wet weather.

This is what I was wearing during my Fort Collins-to-Boulder-and-back ride. It was adequate and comfortable enough, though like I said, my hands and feet were definitely a bit on the cold side:

I felt a windbreaker was unnecessary (many will disagree with me here), but a balaclava would have been nice.

i can relate .........i use to live in the northern sierras just north of lake tahoe and just west of glacier park montana......now i am in wisconsin.........i bought a pair of storm socks from campmor they are great.......wear them with my tennis shoe when i bike.......bought a pair of cold weather tights from mt. borah great