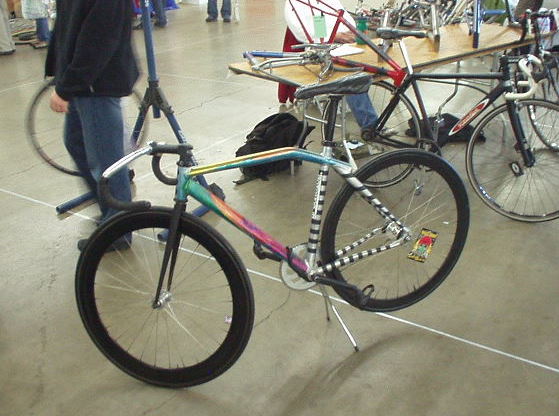 Recently there have been calls for countries around the world to criminalize the publication of offensive cartoons depicting long-haired prophets. Then, in order to do business in China, Google, Yahoo, and Microsoft were forced to censor search results for queries such as “democracy,” “capitalism,” and “girls getting it on with Brianna Banks.” Now, in the latest twist in the war against free speech, a mayor in New Zealand wants to ban bicycling in the nude. What’s next?

In this important development, Tasman Mayor John Hurley wants the police to arrest unclothed cyclists taking part in Golden Bay’s Third Annual Naked Bike Ride, scheduled for Sunday, March 12. According to an article entitled, “Mayor opposes nude cycling race on safety grounds,” it first appeared that his major objection was that many (well, virtually all) of these cyclists were not wearing helmets. However, then a story in New Zealand’s Stuff revealed that Mr. Hurley’s reservations were a bit more than skin deep.

“Police arrest streakers at football matches,” he pointed out, “and they will look like utter fools if they don’t arrest people riding nude.” (As if the police would look more like fools than cyclists wearing no clothes.)

His sidekick Ron Swan—who started a petition against the naked bike ride—even went as far as calling the whole event “immoral.” Swan is “well known in the community as president of the Golden Bay Senior Citizens Association” (i.e., he is an old prude.)

Actually, it seems that both Ron Swan and Mayor Hurley need to lighten up, throw caution to the wind, and strip off their underpants once in a while. After all, just last November, some of Hurley’s colleagues governing other areas of New Zealand were posed to take part in a naked swim. This swim—which consisted of four of them swimming with Ranui Naturalists Club patron Bob Harvey—raised a whopping $105 for the Aukland Philharmonia, the city’s symphony orchestra. In addition to raising this sum of money (that otherwise would hardly be worth stripping one’s clothes off for), the swim would have other benefits.

Cameron Brewer, one of the sanctioners of this event, professed,

The nude swim will give the Minister for Auckland Issues the chance to inspect up close which mayor has the best credentials to possibly one day lead the super city.

I am convinced the mayors will take up this generous gift. Deep down they all have naked ambition, and are acutely aware they need to better familiarize themselves with each others’ regions.

Whether Sunday’s ride will go on as planned still remains to be seen, but at least the cyclists have an unlikely ally: Police Sergeant Arthur Clarence. He confirmed that after extensive legal research into the issue, police concluded that nude cycling is not as of yet illegal in New Zealand. Indeed, at last year’s naked bike ride in Auckland, few cyclists were arrested. One of them was Simon Oosterman, who pleaded not-guilty to the charge of indecent exposure by showing up in court naked.

“It is unbelievable that five police cars would be sent to a fun and harmless protest. The real issue is our indecent exposure to the negative social, environmental and climatic effects of vehicle traffic and pollution,” he claimed. “It was obvious the police were involved in a cover up,” he added.

I eagerly await what happens in this Sunday’s rally, and we shall see if the participants can continue to ride their bikes unrestricted by the mayor, police, and clothing.

If not, at least there are plenty of other naked bike rides all over the world, including one on June 10, 2006 in Seattle, Washington.

“It is the most exhilarating cycling experience since taking off your training wheels,” proclaims the World Naked Bike Ride Seattle website. It rationalizes the event by listing goals other than seeing people’s titties, including: community building, protesting oil dependency, bringing attention to local safety concerns, rejoicing in the individuality of our bodies, showing solidarity with other naked cyclists, and generating interest in progressive and artistic venues.

Rules include “don’t be an idiot” (I suppose people who ride without as much as a millimeter of padding between the saddle and their private parts need to be reminded of that), and “do not bicycle near anybody laying on the beach.”

Similar events in the UK also dare you to be bare. These events, which tout zero discrimination, even say that you do not even have to ride a bike to participate! Instead, you can run, bring your skates, or hire a rickshaw bike taxi. It is unclear whether the rickshaw drivers need to be naked as well.

Update 3/13/06: The Golden Bay World Naked Bike Ride was a success with no arrests!