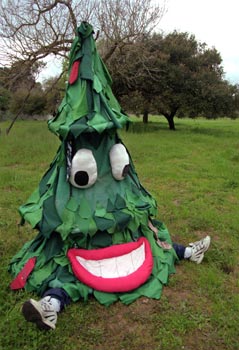 Seems like my alma mater has been in the news quite a bit lately (read about the DARPA robotic vehicle and a wild jet-powered VW Beetle). This latest story by SF Gate was particularly comical, however.

As it turns out, the Stanford tree was caught drinking at one of the Cal-Stanford basketball games. She (yes, our mascot is female this year; we do not discriminate) apparently got caught after she was “jumping and dancing” in a manner “consistent with that of someone who’s had something to drink.” It didn’t help that the authorities claimed to see her drinking a flask through her costume. Reminded me of when the 1996 tree was attacked by rabid Cal fans, which at first I thought was pretty funny until I realized that the tree that year was Chris Cary, someone I went to high school with in Stockton, CA.

Read more about the latest tree incident in commentary by Independent Sources entitled, “This is not a typo: Tree suspended for drinking on the job.” Very amusing.

Update 3/14/06: A new tree has been picked! It seemed like the frontrunners during “Tree Week” included Christina Zempel, who had walked the entire length of Palm Drive clad only in green paint and burst into classrooms as the Kool-Aid man; Anonymous, who slept in White Plaza in a tent for a week; and Tommy Leep, who dropped his pants during a basketball game and underwent a bizarre torture ritual. Ultimately, word has it that Leep won, but only after winning at ro-sham-bo, offering more proof that rock-paper-scissors is a real sport.