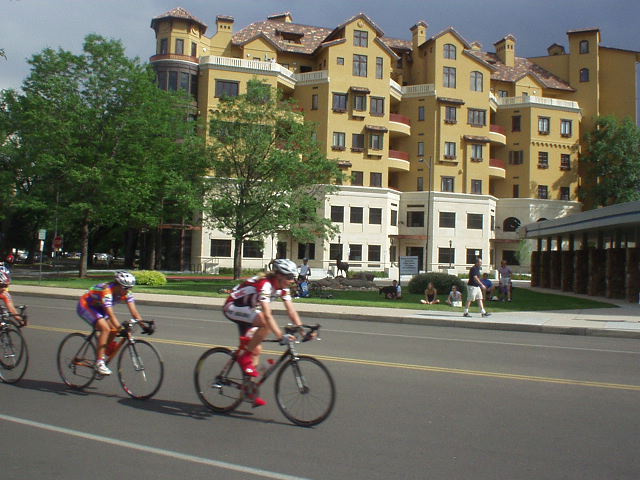 The New Belgium Criterium capped off an eventful weekend for downtown Fort Collins. My friend Diana was racing in it, so I went to watch and cheer. Unfortunately only a couple dozen people came out to watch (and fairly dispersed along the streets), so at times I felt like I was the only one applauding.

It was exciting nonetheless. Women were off the back after just about ten minutes of racing, but 20 remained in the lead pack. At one point in the race five cyclists crashed right in front of Diana, and she barely managed to avoid them by inches. Um, crits are too dangerous for me; I think I’ll stick with time trials, thank you.

Diana finished in the lead pack to her best criterium finish ever; pretty amazing considering that she won the Cat 3 Time Trial State Championship in Denver the day before! Then after the race she dragged me out for a run along the Poudre Trail. Crazy woman. 🙂

Oh, the race was named for the New Belgium Brewery, presumably the sponsor and my favorite local beer maker out here. They manufacture the Fat Tire and Skinny Dip beers, making them an appropriate sponsor for this skinny tire race, ha.